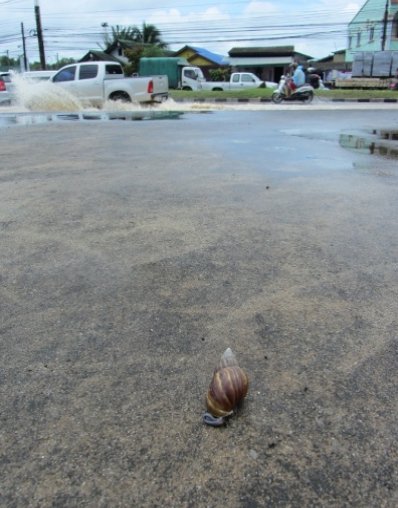 PHUKET: The floodwater that slowed traffic to a snail’s pace across Phuket this morning resulted in a Thai Airways flight being delayed to ensure passengers caught in traffic jams could get aboard.

Staff at the Phuket International Airport Customer Service department confirmed to the Phuket Gazette that Thai Airways flight number TG204, scheduled to depart Phuket at 10:55am, was delayed for 30 minutes to allow passengers arriving late to clear entry procedures and take their seats on board the aircraft.

However, the staffer also confirmed that was the only flight delayed; all other flights were operating as scheduled.

“Only TG204 of THAI Airways waited for its passengers this morning. Our flight schedule is now running on time, as normal,” she said.

“People who missed the morning flight can catch another flight in the afternoon. There are 11 flights of THAI Airways leaving Phuket to Bangkok daily,” she added.

“However, it was only mud on the road. Nobody was injured and no houses were damaged.”

“We also received a report of a damaged road in Paklok Village 4. The road was blocked. It is clear now and traffic can pass as usual.”