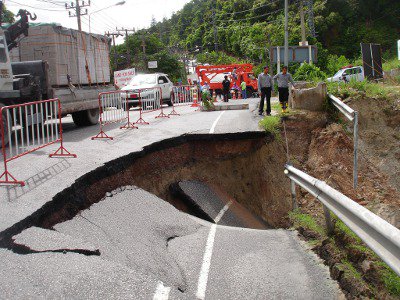 PHUKET: The heavy rains last night and the ensuing floodwater this morning have damaged several roads across Phuket, including the critical route from Patong to Phuket Town.

A section of road that suffered a lethal sinkhole in 2009, about 150 meters from Sea Pearl Villas on Phra Baramee Road, last night washed away completely, forcing Patong council workers to shut down the lane.

One Patong Municipality worker told the Gazette, “We are now filling the section with rocks and smaller landfill. This will take a couple of days.

“We have already contacted the Phuket Highways Office to request that they repave the damaged section of road, but we are not sure when they will be able to do it,” he added.

When the section of road that washed away last night first collapsed in 2009, the mayor of Patong himself, Pian Keesin, happened to be heading down the hill towards Patong at about 5pm – just as the surface of the road was beginning to fall away, creating the giant hole.

News of the road collapse also comes after officials in May voiced their concern that a different section of the same road, further up the toward the Chinese shrine, would wash away. The shoulder of the road that eroded during heavy rains last year, which would send motorists plummeting down a steep slope, has yet to receive a “permanent” fix.

Meanwhile, the road behind the Loch Palm Golf Course in Kathu also suffered damage last night, with three roadside power poles being brought down by the wet earth and moving water.

The damaged section of road, about one kilometer from the golf course, had nearly an entire lane washed away.

Power was to be restored to homes along the road this afternoon.

However, telephone cables, that were strung up to the same utility poles, were also brought down by the deluges.

“We’re still waiting for the officers [from the relevant authority] to come and fix them. We’re not sure when telephone services will be restored to the area,” one of the workers told the Gazette.