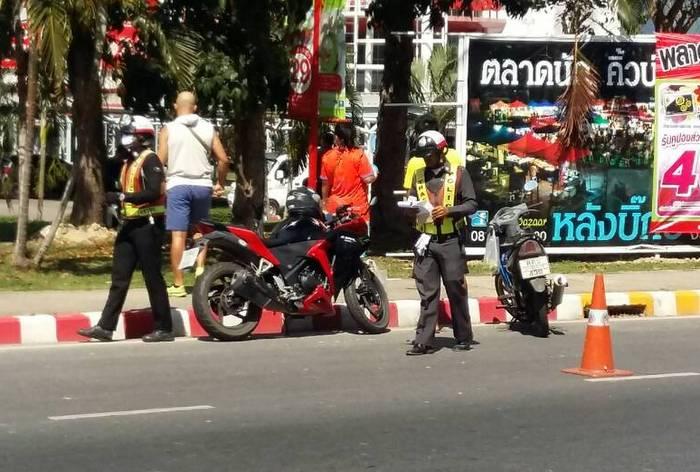 PHUKET: More than 40 motorists were fined in a span of two hours at a checkpoint at the northbound exit of the Darasamuth Underpass next to Central Festival Phuket yesterday.

“This is part of the push by the Phuket governor and the Phuket Provincial Police commander to better enforce traffic laws on the island as a way to reduce the number of accidents and deaths,” said Capt Siripong Wongsanpet of the Wichit Traffic Police.

A total of five motorbike drivers were fined for using the underpass, while nine were arrested for making an illegal u-turn at the mouth of the underpass. Each was charged the maximum penalty of 1,000 baht.

“Making a u-turn at the entrance and exit of the underpass is exceptionally dangerous. We’ve put up dividers to try and stop people, but clearly they continue to ignore the law,” said Capt Siripong.

“Three taxi drivers were also fined for not being appropriately dressed,” confirmed Capt Siripong. “We will continue to have pop-up traffic checkpoints in order to help reduce the number of accidents in Phuket.”

The campaign, titled ‘One District, One Road, With 100% Helmets’, was launched on February 1 in an effort to improve Phuket’s road safety. Helmet-less drivers caught at checkpoints throughout the island had their bikes seized and were escorted to a police station to view road accident videos, purchase a 99-baht helmet and pay a fine.