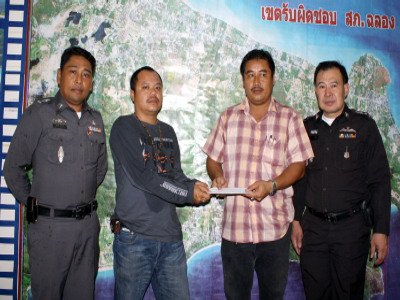 PHUKET: A Phuket tuk-tuk driver’s bravery led to the arrest of a man who allegedly tried to steal more than 170,000 baht from his employer early on Monday night.

It was his wife calling to tell him that his drunken passenger had just stolen a large sum of money from his employer and was trying to make a getaway.

Despite fears that the passenger sitting next to him in the front seat might be armed, Mr Phathaphon bravely turned his tuk-tuk around and drove straight to Chalong Police Station, where officers were waiting.

Santi Nasaeng, owner of Santi Phuket Construction Company, earlier reported that Mr Saichon had prised open a door at Mr Santi’s office in Kata and fled with 173,460 baht in cash.

Mr Saichon ran to the Kata Palm Beach Hotel tuk-tuk rank and agreed to pay Mr Phathaphon 500 baht to take him to the bus station – as soon as possible.

Mr Phathaphon told the Gazette at Chalong Police Station yesterday that Mr Saichon smelled heavily of alcohol when he agreed to drive him to the bus station.

Mr Saichon at first sat in the back of the tuk-tuk, but after the vehicle passed Chalong Circle and got onto Chao Fa West Road he asked to sit in front. Clearly agitated, the heavily tattooed man kept telling him he was driving too slowly, Mr Phathaphon said.

It was at this point that Mr Phathaphon received the phone call from his wife saying police suspected the man sitting next to him had just stolen almost 200,000 baht.

Mr Phathaphon started to fear Mr Saichon might pull a weapon on him.

At that moment, the phone rang again. It was a police officer, who told him to drive slowly, turn his tuk-tuk around and drive to Chalong Police Station.

Mr Phathaphon mustered his courage and did as the police asked, which led to Mr Saichon’s arrest.

Mr Phathaphon said he wanted to show tuk-tuk drivers in a better light and he hoped that his actions set an example for other people.

After getting his money back, Mr Santi at 3pm yesterday presented 10,000 baht to Chalong Police Superintendent Wichit Intorrasorn in a show of thanks.

Mr Phathaphon received 2,000 baht for giving such good co-operation to the police.