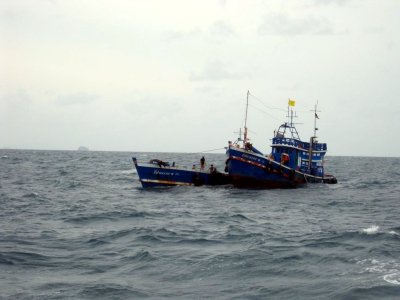 Rear Admiral Nawin Thananet, Chief of Staff of the Royal Thai Navy’s Third Area Command, said the salvage effort will be conducted by the vessel’s owner and the Harbormaster Department.

“We will just observe the operation and help them if necessary, especially if there is any leaking fuel. That falls under our area of responsibility,” he said.

Sorbent booms and chemical dispersants will be at the ready and a helicopter will be on standby if needed, he said.

Time is crucial to the operation, as the modified fishing boat now resting 34 meters beneath the surface is believed to still contain most of its cargo of 40,000 liters of diesel fuel, RADM Nawin said.

“It seems the fuel is not leaking, but we are afraid the tanks could hit something and rupture during the salvage operation. Two navy ships will also be on standby in case anything happens,” he said.

The owner is eager to re-float the vessel and salvage the valuable diesel, he said.

“We have to remain flexible about the time because of the changing sea conditions. It could be earlier or later than 4pm, depending on wind and wave action. It is also possible that we may have to postpone to a later date altogether,” he said.

The Meteorological Department’s 24-hour forecast for Phuket for the period starting at noon today calls for scattered thundershowers covering 60% of the province, southwesterly winds of up to 35 kmh and wave heights of one to two meters, higher during rainfall.

The budget for the salvage operation alone was about 100,000 baht, but the cost of the entire operation would exceed one million baht, RADM Navin said.

Part of the work included aerial monitoring of a silver sheen that appeared on the ocean’s surface over the weekend. The sheen, which reached a maximum length of about three miles and was half a mile across, quickly dissipated. Little was visible at the last check at dawn on Monday, he said.

This leads all involved to hope that the release was only about 300 to 400 liters from the fuel tank of Choke Thavorn 6, and not from its cargo.

Vessels from the Department of Marine and Coastal Resources (DMCR) will also be at the site to monitor the operation and any possible environmental impacts.

Wannakiat Thubthimsang, Director of the DMCR’s Phuket Marine Biological Center, said the sinking of Choke Tavorn 6 was the first incident of its type in the region.

He hopes that the vessel and its cargo can be salvaged and the environmental impact minimized, but said he doubted a release would have an impact on Phi Phi Island and other popular tourist destinations in the area.

However, the effects on the environment could only be assessed after the successful completion of the salvage operation, he said.

[For an in-depth interview with Mr Wannakiat on environmental protection issues pick up a copy of the next issue of the Phuket Gazette, available at newsstands around the island from Saturday]