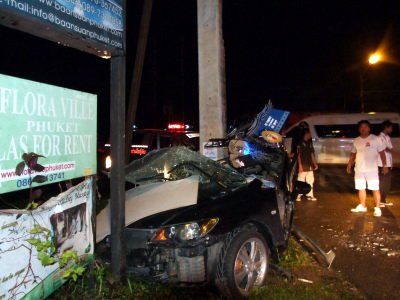 PHUKET: A volunteer emergency rescue worker, who used his spare time to help Phuket road accident victims, died this morning when his own car slammed into a power pole on Chao Fa West Road in Chalong.

Chalong Police duty officer Anukul Nuket and fellow officers responded to a call at 1:20am today reporting that a black Honda sedan had overshot the curve near the Chalong power substation and slammed into a power pole at the corner of Chaofa Soi 50, also locally known by its old name Soi Taiad.

The driver, 24-year-old Warak Singhabumrung of Nanai Rd in Patong, was dead inside the car.

It took volunteers from the Phuket Ruamjai Kupai Rescue Foundation almost three hours using three “jaws of life” cutters to recover the body of their former colleague from the wreckage.

They were assisted by Wichit Municipality Disaster Prevention and Mitigation officers, who were also called in to help.

The force of the impact pushed Mr Warak’s body into the front passenger’s seat. His skull was fractured and his neck, arms and legs broken.

Volunteer colleagues and Mr Warak’s family members expressed deep sorrow while watching his body being pulled from the wreck.

“He was very friendly and a good man, willing to help others,” said one onlooker.

Mr Warak, a taxi driver who worked the beach road in front of the Hilton Phuket Arcadia Resort and Spa in Karon, had worked many years as a Phuket Ruamjai volunteer.

One eyewitness told police the car was heading south at high speed before it left the road, reportedly airborne for about three meters before it crashed into the power pole.

Mr Warak’s body was taken to Vachira Phuket Hospital for examination and storage while funeral arrangements are made.

Family members accepted the accident as Mr Warak’s fate. The curve, notoriously dangerous especially in the rain, has been the site of many serious accidents resulting in injury and death over the years, they said.

The accident came less than 24 hours after another man luckily escaped injury on Kata Hill. The car slid off the road and became wedged between a power pole and the roadside embankment.

Swiss man falls to his death in Phuket