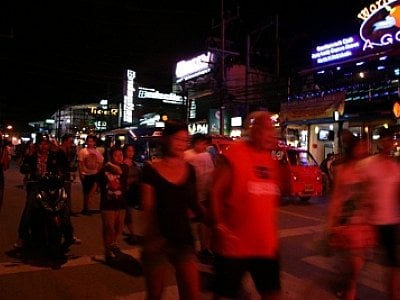 PHUKET: A Patong tuk-tuk driver questioned by police has denied any involvement in the alleged rape of a 21-year-old British female tourist in Phuket early on Monday morning.

The woman went to Bangla Road with friends on Sunday night but later separated from them and went to another bar alone, said Kathu Police Duty Officer Jakkrapong Luang-aon.

“She hired a tuk-tuk driver to take her back to her hotel in Cherng Talay at about 2:30am, but instead she was taken to an isolated place near Tri Trang Beach [in the opposite direction to the south of Patong],” said Capt Jakkrapong.

“There was another man sitting in the front cab of the tuk-tuk with the driver,” he added.

The woman reported that after the tuk-tuk driver stopped the vehicle, the other man exited the cab and allegedly robbed her by holding a knife to her throat.

“The woman said she could not remember anything after that until she regained consciousness in the morning,” said Capt Jakkrapong.

“When she woke, she found her underpants beside her and, [according to her], the tuk-tuk driver was still at the scene,” he added.

The woman told police that she was frightened, dressed quickly, and raced off to find help, but the tuk-tuk driver allegedly chased after her.

Reaching the road, she waved down passing motorists and got a lift back to her hotel, Capt Jakkrapong said.

“She reported the incident to Cherng Talay Police later after noticing internal pain when she got back to her hotel. They referred the case to Kathu Police as the alleged incident occurred in Patong,” he added.

“We have questioned the tuk-tuk driver, but he has denied any involvement and said he had no recollection of the events,” he said.

Police are now seeking the man who allegedly robbed the woman.