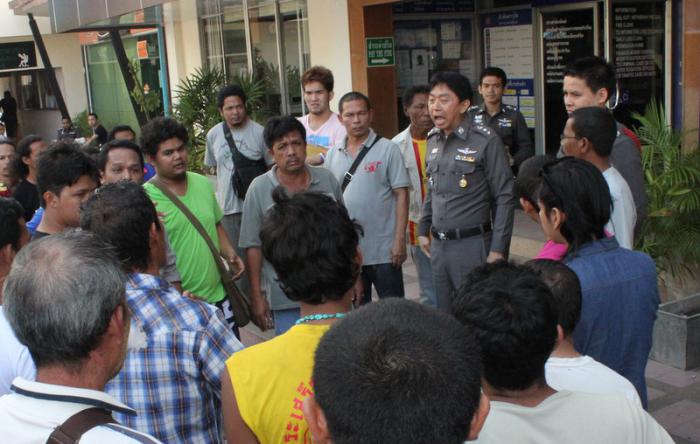 “I think those four drivers did the right thing by reserving public parking for the people. I don’t understand why police arrested them,” he explained.

“There are too many illegal taxis [black plate] in Patong. Police should focus on arresting illegal taxis rather than arresting legal ones like us. It seems like the police are persecuting us.”

At about 11pm, the tuk-tuk drivers massed to disrupt traffic in Patong along Rat-U-Thit 200 Pi Road where it intersects Baan Sai Nam Yen and Soi Bangla, and at the intersection on Thaweewong Road at the Laem Petch football field.

They presented four demands – remove Patong Police Superintendent Chiraphat Pochanaphan, get rid of illegal taxi drivers, do not charge drivers for participating in the blockade and stop arrests of tuk-tuk drivers who prevent taxis from parking in public areas.

At about 2am, Col Chiraphat negotiated with the drivers for 20 minutes without success.

“We’ve talked with Col Chiraphat many times, but nothing has been fixed. We will continue blocking the road until the police accept our demands,” said Mr Sakol.

At 2:30am, the blockade reconfigured and the tuk-tuks moved to block main access routes to Patong, stopping traffic on Phra Barami Road in front of Sea Pearl Villas, on Sirirat Road in front of Simon Cabaret and at the circle connecting Thaweewong Road to the Kalim Road.

Phuket Provincial Police Deputy Commander Sakchai Limcharoen was called to the scene, and by 4:30am the drivers had agreed to open the roads while negotiations were under way.

“I told them to open the road first, and then we would consider their suggestions. The tuk-tuk drivers relocated to Patong Police Station and closed it down instead,” Col Sakchai said.

At 6am, Phuket Provincial Police Commander Ong-art Phiwruangnont arrived at the station, and by 8am, police had agreed to all the tuk-tuk drivers’ demands.

Col Sakchai was made acting superintendent of Patong Police.

Col Chiraphat was temporarily transferred to Phuket Provincial Police Station, Col Sakchai said. He did not clarify what Col Chiraphat’s new position would be.

The tuk-tuk drivers dispersed once their demands were met.

“We are satisfied now, but we will be back if police do not follow through,” Mr Sakol said.