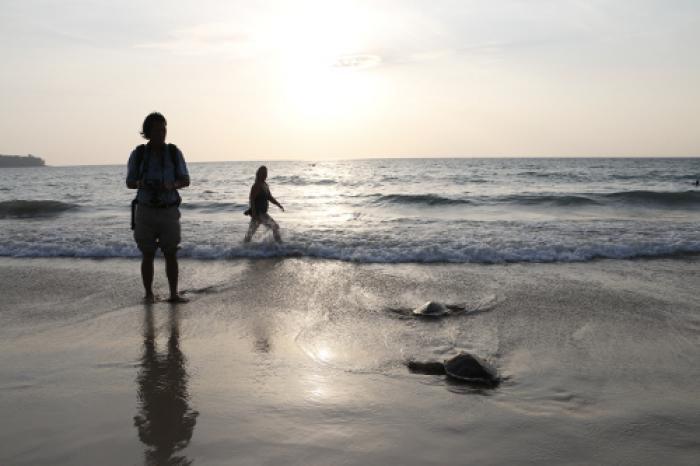 PHUKET: “Sea turtle with fish net wounds saved on Phuket beach”, “Phuket sea turtle on the hook – saved”, “Six injured sea turtles beach in Phuket, Phang Nga in one day” – these are just few of many Phuket Gazette headlines chronicling the plight of the region’s sea turtles in the last couple of years. No wonder that five of the seven existing species of sea turtle are classified as endangered or critically endangered. Luckily, some people are putting up a fight.

You surely wouldn’t think of the crowd that gathered on Friday, February 21 at Angsana’s Xana beach club as warriors. Yet the toddlers, children, elderly couples and whole families – all together 500 people – who flocked to Laguna beach, were indeed fighting another battle in the ongoing war for the future of sea turtles – a winning battle.

During this year’s Laguna Phuket Sea Turtle Release Ceremony, the 20th of its kind, 90 juvenile turtles were released into the Andaman Sea and more than 200,000 baht from turtle ticket-sales and other activities was raised to support Phuket Marine Biological Center and 3rd Area Naval Command of the Royal Thai Navy, whose ongoing conservation and rehabilitation programs include studies of nesting behavior and tracking and analysis of turtle migration via microchips and satellite tracking devices attached to released turtles.

All this effort isn’t without reason – sea turtles are an important element of the sea and beach ecosystem. They are one of the few creatures feeding on the sea grass, which is vital in helping to maintain sea grass beds. They also help keep the jelly fish population (including the stinging kinds) under control and supply nutrients to beach and dunes vegetation helping prevent erosion. Not to mention that they are majestic, beautiful and cute, according to some of the participants of this year’s sea turtle release. Just take a look at the pictures.

One night (and day) in Bkk