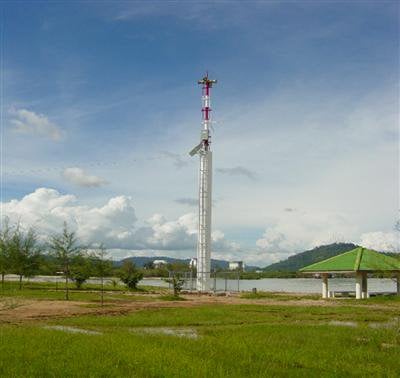 SAPHAN HIN, PHUKET CITY: People enjoying their morning workouts at the Saphan Hin municipal park at 8am on Wednesday were a bit surprised when the Thai National Anthem was played through the tsunami warning tower there for the first time.

Present at the test, which was repeated at 6pm the same day, were Phuket Vice-Governor Smith Palawatvichai and the head of the Phuket Office of the Department of Disaster Prevention and Mitigation (DDPM), Chotenarin Kerdsom.

Although it was earlier reported by some media that the playing of the Thai National Anthem would take place at all 19 NDWC warning towers in Phuket the same day, DDPM-Phuket officials later confirmed Wednesday’s tests took place only at Saphan Hin.

The officials would not confirm reports that the NDWC plans to make the playing of the National Anthem through warning towers part of weekly tests every Wednesday at 8am and 6pm.

Playing of the national anthem at 8am and 6pm on radio stations and through village loudspeakers is a longstanding tradition in Thailand. The practice is often referred to as the “time check” by English-speaking expat residents as it affords a convenient means of checking timepieces for accuracy.

None of the people present at Saphan Hin seemed surprised when the National Anthem was played; most stood erect to show their respect for the country.

“Many local people and tourists have expressed concern about the reliability of the warning system. From this test, I am confident that the system is working and can warn the public about any impending emergency,” V/Gov Smith said.

Other disaster preparedness measures recently undertaken by the province have included training for airlift evacuation of disaster victims, he said.

The province will also conduct additional training and evacuation drills later in the year.

Seaside hotels outside the existing tsunami warning coverage areas are encouraged to contact the DDPM to install equipment to receive the NDWC signals and to set up their own warning systems, he said.