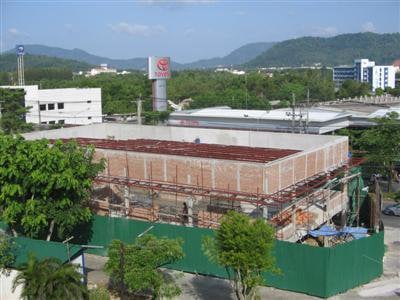 RASSADA, PHUKET: Work on a new canteen and car park project at Mission Hospital Phuket began in early May and is scheduled for completion some time in July, hospital management has told the Gazette.

The project contract was signed on February 1 this year.

The upper floor of the two-story structure, located in the area formerly occupied by a section of the front parking lot, will house a cafeteria on the top floor and car park with space for 20 cars below. The entire structure will occupy 650 square meters.

The air-conditioned cafeteria will have glass walls offering views of the Kathu hillsides. It will serve a variety of food and beverages, especially vegetarian fare which the hospital has promoted in the decades since it first opened in 1940. Service will be available to the general public as well as hospital patients and staff.

The new cafeteria and car park building is the latest expansion of the hospital, which last year raised its number of in-patient beds to 50 following the completion of its new Hongsyok Ward, on the fourth floor of the in-patient building.

The Hongsyok Ward was fully funded by a five-million baht donation by Boonsri Hongsyok, whose family have long supported Mission Phuket.

With the completion of the new covered car park, employee spaces and the new 80-space parking lot behind the hospital finished last year, the hospital will have parking for 120 vehicles.

Other improvements include several WiFi computer terminals available for general use. There are two terminals in the out-patient ward, another in ward two, and a few more near the parking area. However, the hospital plans to greatly expand the number of terminals throughout the facility.

Mission Phuket also hopes to build a new four-story building to house new pediatric, obstetric and intensive care units as well as a large meeting room. The project had to be put on hold due to the downturn in the economy, but management now hopes to begin construction next year.

The building would be located at the back of the hospital, in the area currently occupied by the small parking lot near the Hongsyok Physical Therapy building, Mr Atikom said.

Mission Hospital is a “not for profit” medical service and is one of more than 400 health services operated by the Seventh-day Adventist Church around the world.