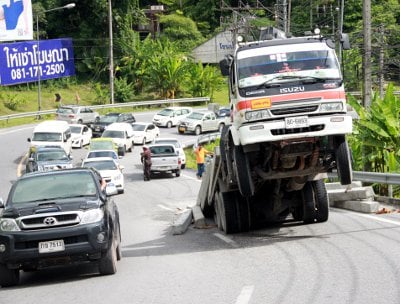 The mishap occurred at about 11:30am, while the truck tried to climb the steep incline on the western side of the hill in its bid to deliver the power poles to a construction company in Patong.

Halfway up the slope, the truck pitched. With the cab now pointing skyward, the concrete poles started sliding off the back of the truck and into the path of the traffic following close behind, explained Sen Sgt Maj Kritchana Songsri of the Tung Thong Traffic Police.

“There were no injuries and no collisions. It just caused a traffic jam while we directed cars and motorbikes to go around the stalled truck,” he said.

The ensuing tailback stretched all the way to the Caltex gas station at the See Kor Intersection, about 1.6 kilometers from the eastern* base of the hill.

At last report, Sen Sgt Maj Kritchana was organizing the safe removal of the truck and the spilled power poles.

* Correction: The original report stated that the tailback stretched 1.6 kilometers from the western base of Patong Hill. The error is regretted.

The Curious Case of the Invisible Crown Prince Paras Shah