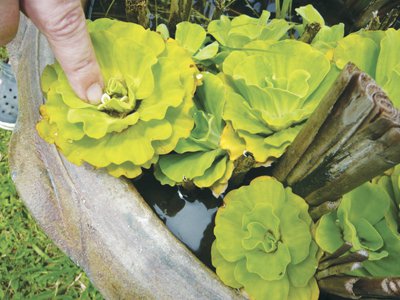 PHUKET: As readers of last week’s column will have noted, there are, in essence, two kinds of aquatic plants: first, those that produce erect stems and flowers that keep only their roots in the watery element; and second, those with leaves and flowers that float, either with their foundations embedded in mud at the bottom, or, as in the case of the water lettuce, simply dangle their rootlets beneath buoyant leaves.

The water lettuce (pistia stratiotes) is very common in Thailand – some would say too common – but it produces rosettes of emerald green leaves, and it will usefully cover any fresh-water surface in a matter of weeks.

Sometimes known as the hell-flower, its leaves are deeply ribbed and scalloped, thus providing a textural contrast when mixed with free-standing plants. In common with the water lily, it not only provides excellent cover for small fish, but out-competes algae in obtaining soluble nutrients, thus helping to prevent the discoloration of the water in your pot.

The water chestnut (trapa bicornis) operates in a similar way – a low floater whose leaflets grow on the surface and form attractive diamond-shaped patterns. But unlike the water lettuce, these leaflets are attached to a submerged, brown, edible fruit. It is, moreover, less invasive than the shell-flower and does not grow quickly enough to overpower other species. Along with the much more substantial, fleshy leaved water hyacinth, which has the advantage of producing prominent clusters of hyacinth-like, mauve flowers, these “floaters” are all candidates for shallow, wide-rimmed pots. And as with nymphea, they look best if the container is positioned well below eye level.

If these low-lying fellows are hardly the aristocrats of your budding container gardens, then the reed-like typha angustifolia certainly is.

Formerly known the world over as the bulrush of Moses and then as the reedmace, this distinctive plant carries itself with an upright swagger. Like all these aquatic plants, its roots can be completely immersed in water, but because it is so substantial, it is more likely to suit a large, deep pot.

Typha grows on strong erect stems up to six feet in height, and has stiff narrow leaves at the base of the stalks. But its really unusual feature lies in its rich brown cylindrical spikes of densely packed florets up to twelve inches in length, which look like symmetrical sausages and feel velvety to the touch.

There is nothing in the plant world quite like typha. Surprisingly, since it grows all over the Northern Hemisphere, it will tolerate tropical sun.

A splendid column of these thriving in a friend’s roof garden is evidence of that. These spikes can, furthermore, be dried and used in floral arrangements where they will last for years.

Finally another aquatic plant that stands tall. The cyperus, a native of Madagascar, is nonetheless widely available here in Phuket, and is often seen gracing slender containers outside spas and resorts. A dainty but vigorous foliage plant, it possesses green ramrod straight stalks three or four feet in height, at the tops of which are grass-like leaves which radiate out like the spokes of a wheel.

The variety usually found in plant nurseries is alternifolius, but there is a finer form which has feathery, slightly pendulous leaves. Known as Egyptian papyrus, and possibly the real ingredient in the biblical story, it is, in my experience, less hardy than its cousin. Both, however are perfect accompaniments to an elegant, ceramic pot.

As for conventional garden shrubs to go with giant ceramic pots, that is yet another story.

Tip of the week – Fan palm
A reader of Phuket Gazette whose fan palm is “sick”, asks if the pruned outer fronds will re-grow.

She does not say what variety of livistonia is involved, but the answer is probably no.

However, provided the spear leaf is healthy, new fronds should spread out from this growth point, and ultimately give the plant a better shape. Fan palms are temperamental. The fronds sometimes dry out, die back at the outer margins, and take on an ugly brown appearance.

This can be the result of too little or too much water, even over-zealous applications of fertilizer. Fan palms can also suffer from fungal disease (fusarium) which blocks the water-carrying tissue.

These problems are much more likely to happen with potted specimens. At the summit of Rang Hill, plantings of magnificent, broad-leaved fan palms are flourishing in filtered sunlight. Some of the fronds are nearly two meters across. No sign of disease.