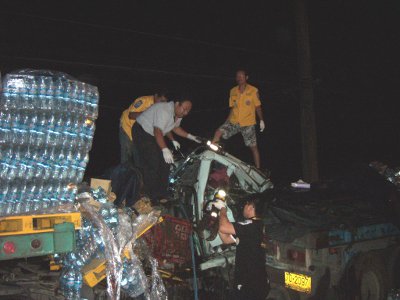 PHUKET: The driver of a tractor-trailer was killed last night when his fully-loaded rig crashed into the back of another large truck parked along the side of Thepkrasattri Road in Phuket.

The driver’s girlfriend, who was asleep in the back of the cab, survived the crash but is being treated for serious injuries at Vachira Phuket Hospital.

Mr Kriangsak was apparently killed instantly when his 18-wheel rig smashed with full force into the back of another flatbed 18-wheeler laden with metal reinforcing bars.

It took rescue workers about half an hour to extricate Mr Kiatsak’s companion, later identified as Miss Laksapha Areeyaphan. The woman, in her early twenties, was rushed to Thalang Hospital for treatment.

She was conscious and able to speak to rescue workers.

His truck was part of a five-vehicle convoy transporting drinking water from Ayutthaya province to the Super Cheap shopping complex in Rassada at the time of the crash, a driver in one of the companion rigs told rescue workers.

As such, Mr Kriangsak was just ten minutes shy of completing the 900-kilometer journey when the crash occurred.

Investigators suspect that Mr Kriangsak fell asleep at the wheel. He was not wearing a seat belt at the time.