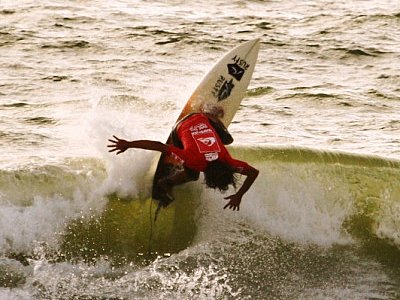 PHUKET: Day two (Thursday) of the Quiksilver Thailand Surf Competition greeted competitors and spectators with clear skies and 1 to 1.5 meter waves on Patong Beach in Phuket.

The Open Longboard Division contestants opened proceedings just after 8am and ran until the semifinalists had been decided.

Shortly after the longboard event, the Men’s Open Shortboard Division continued through to the 4th heat of the 3rd round, just before the sun set.

Bali’s Marlon Gerber in the Men’s Open Shortboard Division easily took the highlight award for the day. In round 3 he put on a clinic of small wave mastery with combinations of turns, hacks, airs, and floaters.

Gerber’s skills earned him the two best single wave scores of the day. First a 7.25 and then a massive 8.25 to end the heat with a stunning 15.5 out of a possible 20 point maximum. Understandably, he was thrilled with his performance.

“From the beach the waves didn’t look that good, but they were a lot better than they looked. My board is working really well, it’s the same board I won my last contest in Indonesia with, so I could get speed and make just about any maneuver I tried. It was really fun out there, and I’m having such a great time here. It’s my first time in Phuket and I’m very stoked to be here, meeting all the crew and having a blast. I can’t wait to surf again tomorrow,” he said.

The Longboard Division contestants put on impressive displays of both noseriding and progressive longboarding prowess in the morning’s session. Arif “Mencos” Nur and Husni Ridwan from Indonesia, Aaron Wright from America, and Luke Landrigan from the Philippines all enjoyed their spell on the water.

This is Landrigans’ first visit to Phuket and winning his quarterfinal heat meant a lot to the pro.

“It was great to be out there and getting so many fun waves, I never realized that there was such good surf here. There are all kinds of other things to do here as well, so I’m really happy I made the trip. I’ve competing in both the longboard and shortboard divisions just to make sure I get all the waves I can during the few days I’m here,” he said.

Round 3 and round 4 of the Men’s Open Shortboard are also scheduled for today, in addition to several Masters Division heats.

The Phuket Gazette is proud to sponsor the Quiksilver Thailand Surfing Competition.