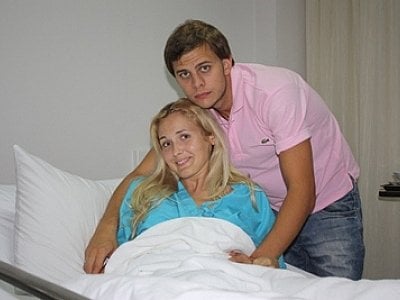 PHUKET: A Ukrainian couple’s honeymoon turned to tragedy when a bull elephant went berserk on a Phuket trekking tour, attacking the female elephant she and her husband were riding.

Tetiana Meia, 26, suffered clean breaks to her left femur, right tibia (shin bone) and right fibula, along with scrapes and bruises all over her body when “Captain”, a bull elephant at Camp Chang in Kalim, attacked the elephant she was riding with her husband, Artem Perepelitsyn, 24.

Mr Perepelitsyn suffered a puncture wound and deep cuts to his left ankle and foot.

Although the incident occurred on September 12, the newlyweds came forward this afternoon after reading on the Phuket Gazette website that, contrary to what the owner of Camp Chang told them, Captain had been involved in a rampage in January 2010 which sent tourists running for their lives and a Swedish man to hospital with a broken leg.

“We were riding on the elephant side by side, with my wife to the left of me, for about five minutes when it happened,” Mr Artem said.

“I turned to look behind me and I could see Captain running uphill toward us,” Mrs Meia said.

Captain was carrying two American tourists and a mahout at the time, she said.

“Captain charged with his tusks into the right side of our elephant, and then again, and again,” Mr Perepelitsyn said.

On the third blow, the couple’s elephant fell onto its left side, pinning Mrs Meia to the ground. The mahout was able to jump off the beast, but the Ukrainians were trapped in the seat fastened to the elephant’s back.

“The guy from the camp had tied a strap across our laps and when we fell, it came up and tightened, so we couldn’t get off the elephant. I somehow managed to pull myself out, but my wife was stuck,” Mr Perepelitsyn said.

“After we went down, Captain continued attacking, pushing our elephant and my wife along the ground,” he said.

“We were screaming and I thought I was going to die because I couldn’t feel anything and [the elephant] and I were sliding and sliding,” a tearful Mrs Meia said.

Finally, one of the staff cut the strap with a knife and a frantic Mr Perepelitsyn was able to pull his wife free.

Mrs Meia was transported to Phuket International Hospital where she has since had titanium plates attached to bones in both of her legs to keep them stable. She remains bedridden but hopes to be able to bend her knees and fly home to Odessa, where she works as a travel agent, sometime next week, she said.

Mr Perepelitsyn, an IT business owner, is able to get around on crutches as his left ankle and foot heal.

Camp Chang owner Trin Khanwilaikul has declined to comment to the Gazette about this latest incident, but in the 2010 incident she blamed Captain’s behavior on a mahout.

The newlywed Ukranians were satisfied with Ms Trin’s handling of the matter until she went silent after the pair asked for monetary compensation.

“[Ms Trin] came to visit us every day, but lately she’s told us she’s too busy to come. Because we talked about money and I showed her [the Gazette article about the previous attack] and maybe she’s scared,” Mr Perepelitsyn said.

“We still don’t know who is going to pay for this. We only want a minimal amount to cover medical costs. We need money for future treatment,” he added.

“Ms Trin had told us that nothing like this had ever happened, that this was the first time,” Mrs Meia said.

“I want the company to stop using this elephant,” she added.

“I would like these camps to use only female elephants and to make sure they are not too close together on the trails. And, if you’re going to do one of these treks, I want you to think about your family and friends. Think a thousand times before you go on an elephant,” Mr Perepelitsyn said.

Asked if she would consider getting back on an elephant, Mrs Meia smiled and said, “Never”.

Phuket “Number 3′ in Thailand for AIDS