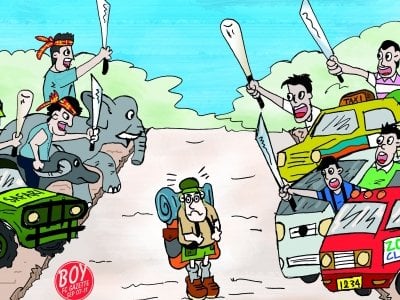 PHUKET: Despite a great deal of press coverage and international diplomatic pressure, altercations between foreign tourists and tuk-tuk drivers are increasing, both in frequency and severity. In one of the latest attacks, a German tourist in Patong was beaten close to death by a pack of gangsters who remain at large.

And a week ago today a Thai tour van driver was brutally beaten with an iron bar by six taxi thugs in Kamala who claim sole ownership of access rights to the Cape Sienna resort and all of its guests. That event and the subsequent smashing of the van’s windshield was witnessed by a horrified tour group already seated in the vehicle.

As is standard in almost all of the beatings by taxi and tuk-tuk drivers over the past several months, the attackers have not been arrested. But in the Kamala case, at least, the police say they have asked the attackers to call in at the station for a discussion as soon as possible, thereby signalling the urgency the enforcers attach to rectification of the crime.

Given this trend and the laxity so obvious in police ‘efforts’ to terminate it, growing numbers of Phuket residents and hospitality business owners are showing symptoms of despair, surmising that it’s only a matter of time before an attack goes beyond the delivery of crippling injuries and results in murder.

Forum comments and letters to the Phuket Gazette confirm widespread concern about the taxi cartels and speculate on the impact of their drivers’ attacks and the increasing use of road, port and resort blockades to fight turf wars.

They see the beatings and blockades as attacks not only against tourists and competing cartel groups, but also against the image and thus the substance of the island’s economy, with tourism being the first domino to fall.

And they express disgust with the drivers’ apparent immunity to justice.

At the recent quarterly meeting of Phuket’s honorary consuls with the Phuket Governor and other local leaders, the tactics used by the various transport syndicates once again became the most heated topic of discussion.

As pointed out – repeatedly – by German Honorary Consul Dirk Naumann, the current and continuing absence of safe and credible public transport in Phuket could easily spell the death of tourism.

That tuk-tuk and taxi drivers collude in their areas of influence is no longer a matter of debate. According to one diagnostician, there are three key indicators of collusion:

2. Penalties for Turf Violation: The savage attack on an entrepreneur who attempted to start a bus service between Kata and Karon a decade ago, and the beating of the van driver in Kamala last week, define the beginning and current state of the violence.

3. Information Exchange: Checker games and whiskey drinking aren’t all that goes on in those little salas in front of all the resorts.

As there is not a single significant resort on Phuket that isn’t effectively held hostage by the cartels, one can only appeal to the police and other local authorities to abandon whatever relationships have enabled the current cartel model for public transport, and to help Phuket reclaim its once proud and coveted position as a great place to visit and live.