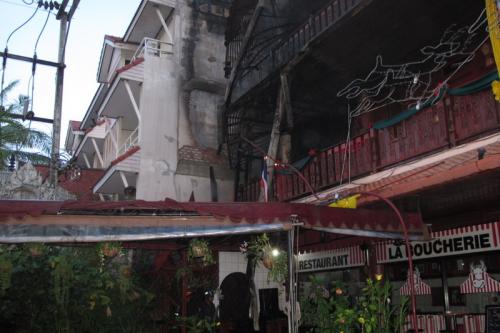 PHUKET: Tourists staying at a luxury hotel in Phuket ran for their lives after waking up to smoke and fire in the pre-dawn dark today.

Seven fire trucks arrived at the well-known Royal Phawadee Village hotel in Sawatdirak Road, near the Patong beachfront, at about 5:30am.

Firefighters took about an hour to bring the flames under control.

Suchanart Khonkaew and her German husband were in room 111 on the second floor when the fire broke out.

“I was asleep, but I woke up feeling hot, as if the air conditioning had cut out. So I got up and then I smelled the smoke. I opened the door to the corridor and saw that the hotel was on fire.

“My husband and I ran for our lives. We did not stop to pick up anything from the room,” she said.

“Everything in our room was damaged. I was so frightened I did not know what to do. We checked-in on December 14, and we planned to check out on January 4,” she added.

“I was in the room alone. I heard hotel staff shouting to cut off the electricity. I got up to see what was going on and then I saw the fire.

“I ran, and I didn’t stop to pick up anything. I was very scared,” he told the Phuket Gazette.

“After the fire was out, I went back to check my stuff. Almost everything in the room was damaged, except for the wardrobe. Everything that was not in the wardrobe was damaged, including my cell phone,” he added.

Patong Police Superintendent Chiraphat Pochanaphan confirmed that no injuries were reported in the blaze.

“So far, all we know is that about seven hotel rooms were damaged. five of them were gutted and the other two suffered partial damage. Fortunately, nobody was injured or killed in the fire,” he told the Phuket Gazette.

Col Chiraphat explained that the fire started in an electrical control room located between the Royal Phawadee and another hotel.

“Hotel security staff told us that the fire started in an electrical control room on the ground floor. They tried to put out the flames by using fire extinguishers, but the fire soon grew out of control,” he added.

“At this stage we believe that the fire was probably caused by an electrical short circuit. However, the fire-investigation team will inspect the scene to confirm the actual cause of fire,” Col Chiraphat added.

“I did not see the fire. I received a call from my staff, so I came as soon as I could to look after my guests. We have 36 rooms. All rooms were occupied,” he said.

“As for the cause of fire, I have to wait for officers to verify that. I am just taking the best care of my hotel guests for now,” he added.

A hotel staffer explained to police that all 36 rooms at the high-end hotel were made of teak.

“We have insurance with three companies. We will be taking good care of our guests. We will make sure that they have accommodation for the duration of their bookings with us and we will compensate them for the loss of their belongings.

“We estimate the damage to cost not less than about 10 million baht,” he added.