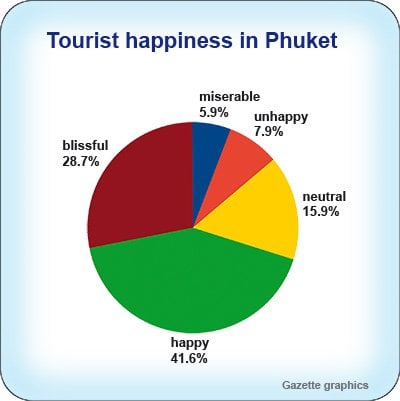 PHUKET: A clear majority of Phuket Gazette readers feel they are happy living in or visiting Phuket, results of a recent readers’ poll reveal.

The Gazette asked online readers: “On a scale of 1-5 (1 = completely miserable; 5 = bliss), how would you rate your average emotional state living in, or when visiting, Phuket?”

Almost one quarter of those taking part (23.3%) rated their emotional state with a “3”, indicating they were neutral: Neither happy nor unhappy.

The poll was initiated following a nationwide ABAC survey that found Phuket residents rated their own happiness lower than residents of any other province in Thailand.

In a breakdown by demographic, tourists taking part in the Gazette poll were more likely to be happy (71%) than unhappy (14%). Almost a third (29%) said they felt “blissful” while in Phuket.

Thais taking part were far less likely to report themselves as happy. Just under half (49%) reported feeling happy compared to 23% who said they were not. The rest were neutral.

Resident expats were in the middle, with 63% saying they were happy compared to 24% who said they were not. The remainder were neutral.

To suggest a poll, email: polls@phuketgazette.net

Phuket coral gets its groove back