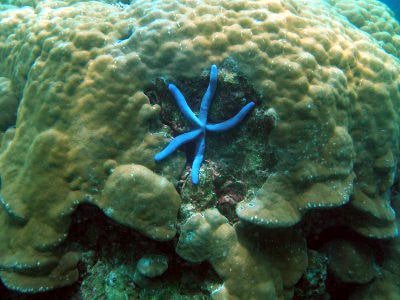 Initial post-bleaching damage assessments showed that coral loss ranged from 25% in some areas to 97% in more vulnerable sites, such as Siam Bay of Racha Yai island.

Diverse coral larvae growth was observed at sites all around the island’s territorial waters.

Coral reefs in Phuket waters are estimated to cover an area of nearly 17 square kilometers, according to the PMBC researchers.

One PMBC report released last month assessed the health of an 80-meter-long reef located off the small bay north of Karon Beach, near Le Meridian Phuket Beach Resort. In addition to the regrowth of no less than 30 coral species, a moderate number of fish and even blue sea stars (Linckia laevigata) were spotted by divers.

The PMBC estimates the reef could recover to its original pre-bleached state in three to four years, under the right conditions.

The report cites human activities in the area as the primary obstacle. Sedimentation from runoff as well as algal blooms thriving on nutrient-rich wastewater were listed as the main hindrances to coral rehabilitation.

The survey also attributed subsurface debris such as fishing tackle and plastic as another threat.

The researchers also called for resorts to better inform guests who dive and snorkel at nearby reefs about correct coral reef exploration techniques.

Reflecting on his first, uneventful dive in Thailand off the coast of Kalim bay last week, Pierre Yves Cousteau, son of legendary Jacques Cousteau, commented, “You don’t want to shoot yourself in the foot, or saw off the branch you are sitting on by destroying the reason why people are coming.”