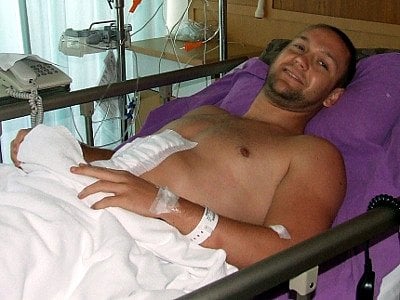 PHUKET: A British backpacker is recovering in Bangkok Hospital Phuket tonight after being stabbed at a beach party on Phi Phi Island.

Nicholas Palmer, 22, was rushed to Phuket by speedboat at about 1am today after he was stabbed twice in the middle of a crowded party at Ton Sai Bay.

Mr Palmer, from Worcestershire in England, underwent an operation this afternoon to repair a three-centimeter gash to his liver.

“I am not really sure what happened. I was walking back to my friends in the middle of the crowd when it happened,” he said.

“I don’t understand it. I haven’t had an argument with anyone and I have no idea why he would do that in the middle of so many people,” he said.

“I think he went to steal my wallet, but when I realized what he was doing I think that’s when it happened,” he added.

Mr Palmer’s friend, Richard Gregory, 23, told the Phuket Gazette that he had been informed that the police have arrested the suspect.

When speaking to the Gazette this afternoon, however, Mr Palmer had yet to give his statement to police.

“The doctor told me that I need to stay in the hospital about seven days,” Mr Palmer said.

He was working as a hotel staffer.

“He was arrested two hours after Nicholas was stabbed,” Lt Col Kunakorn said.

“It was not about robbery as we have already checked the CCTV footage. Both Hamed and Nicholas were drunk and had a bit of a fight before [Nicholas] was stabbed.

“Hamed has been charged with attempted murder. What he has done is not good as it affects our tourism image,” he added.

Hamed is being held in custody on Phi Phi Island.

“Tomorrow, we will present him to Krabi Provincial Court in the morning, then our investigating officers will go to Phuket to question Nicholas,” Lt Col Kunakorn said.

Despite the incident, Mr Palmer and Mr Gregory, who graduated in the UK just last year, remain undaunted about continuing their travel plans.

“Four of us came to Thailand on October 11 and we arrived on Phi Phi two days ago. It was our first time on Phi Phi,” explained Mr Gregory.

“We planned to go to Laos, then on the 24th we were to go to Australia. We have a work visa and want to travel there.

“We will wait for Nick to get better, then he will come with us. I think he will be all right. Because we think that going back home is boring,” he added.

Mr Palmer confirmed that his family had been informed of the incident.

“My mother was cheering me up to get better,” he smiled.