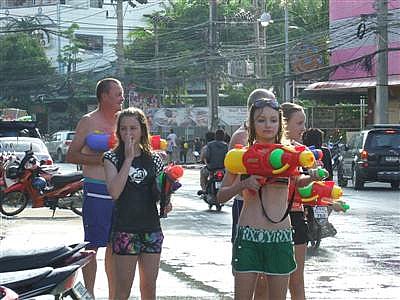 PHUKET: The Phuket tourism industry enjoyed a solid performance during the recent Songkran holidays, with hotel occupancy rates averaging about 70% across the island, officials say.

Some 8,000 tourists took part in special events and activities held during the period, including Phuket Bike Week, ‘Songkran on the Beach’ activities in Patong, and the ‘Ice Songkran’ festival in Old Phuket Town, she said.

Hotels in beach resort areas enjoyed average occupancy rates in the 80% to 90% range, while Phuket Town hotels were at 40% to 50%, she said.

New direct flight services to the island should help maintain these occupancy rates into the post-Songkran period, she said.

These include new services from Hong Kong (Hong Kong Airlines), Burma (Air Bagan), and Perth (Thai Airways), as well as charter flights from India set to begin this month or next month, she said.

The post-Songkran period, with the onset of the monsoon season in Phuket and spring in the northern hemisphere, generally sees a decline in tourist arrivals here.

As part of TAT efforts to market the island as a year-round destination, the agency now refers to this period of the year, previously known as the “low season”, to “green season”. (It does not, however, refer to high season as “brown season”.)

To entice more Thai tourists to visit the island during this period, a number of Phuket travel agents will put on exhibits at the “Two Wonderful Southern Coastlines” domestic tourism promotion event to be held at Queen Sirikit National Convention Center in Bangkok at the end of May.

Now in its third year, the event offers special discounts on package tours and other tourism products.