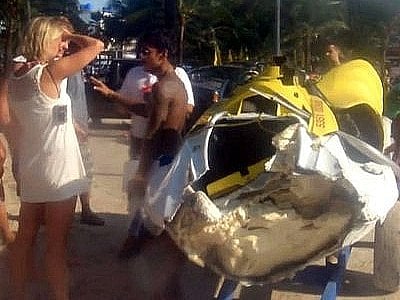 PHUKET: A group of foreign tourists enjoying the Songkran festival in Phuket found out the hard way that the much maligned jet-ski insurance scheme doesn’t cover all repair costs if a jet-ski is badly damaged.

After negotiations with police and the jet-ski owner, British national Nicola Ross Morton agreed to pay an astounding 180,000 baht for damages to a jet-ski he rented out from an operator at Loma Park in Patong on April 13.

Mr Morton’s machine first collided with another jet-ski ridden by 31-year-old American Christine Marie Gordon before crashing into a rocky shoreline outcrop off the coast of Kamala, he said.

Ms Gordon’s jet-ski was only slightly damaged, but the entire fiberglass front end of Mr Morton’s craft was torn apart by the impact and its engine was almost completely dislodged.

Mr Morton was injured in the crash, suffering a broken leg according to a British woman who was riding with him at the time.

Patong Police described his injuries as “minor”, however.

Ms Gordon went to Patong Police Station the following day to negotiate a settlement for both parties, who assumed the cost of repairs would be covered by the insurance agreement they signed upon renting out the jet-skis.

Patong Police called in a mechanic who estimated the total cost of repairs for both jet-skis at 320,000 baht – far more than the maximum 50,000 baht in damage coverage specified in the insurance agreement.

“I made a deal for the tourists by negotiating with the jet-ski owner that Mr Morton would pay 180,000 baht to him. They seemed happy with that,” officer Somsak said.

Ms Gordon had to pay an additional 7,000 baht in damages: 3,000 baht for each of the two days the jet-ski would be out of service for repairs, plus a 1,000 baht deductible charge for the damages.

“The lessee must pay 3,000 baht per day for loss of income to the lessor up to a total of 15,000 baht,” he read from the insurance agreement.

Sucha Petnuan-ong, the 54-year-old jet-ski owner, told Gazette last week that the cost of repairing the machine would be almost as much as buying a new one.

The native of Songkhla province said he bought the jet-ski over three years ago for over 300,000 baht.

“I will be at an absolute loss as a new jet-ski chassis alone is about 270,000 baht. I will buy the new chassis and fix the engine, but I don’t know how much that will cost me. It will take over a month,” he said.

Mr Sucha, who has been operating jet-skis for over 30 years, also has two boats.

“I also had to pay other expenses, such as the cost of recovering the damaged jet-ski and towing it back to Patong, which took two hours. I also have my employees’ salaries to pay,” he said.

“I am also losing rental income that I need to feed my family. I think I will have to take out a bank loan to cover all the repair costs,” he said.

The Gazette tried to contact Mr Morton and Ms Gordon, but they had already checked out of their room at the Boat Lagoon Hotel.

A video clip of the British woman who was operating the jet-ski at the time told one local journalist that they simply fell off the jet-ski, which should have stopped automatically.

Rather, the jet-ski continued at full speed until it crashed into the cliff, she said.

“I fell off and the jet-ski kept going. Normally the key comes out and it stops. Now they are trying to tell me that I caused that. I keep telling them that if I had been on [the craft] I would be dead right now – look at the state of it!” she said.

For an in-depth story about the uncertain future of the Phuket jet-ski insurance scheme, pick up a copy of the next issue of the Phuket Gazette, on newsstands around the island from Friday afternoon. (Digital subscribers click here to download the full newspaper.)