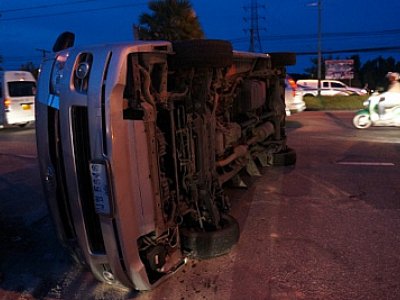 PHUKET: A Phuket tour van flipped onto its side in rush hour traffic this evening while swerving to avoid a cement truck that cut across its lane.

Luckily, the van was empty of passengers and the driver escaped injury.

“The van driver said he was driving northbound along Thepkrasattri Road, heading toward the airport, when a cement truck cut into his lane,” explained Lt Viratch Tanthong of Phuket City Police.

“The back of the cement truck came very close to the van, and then the vehicles brushed. The van driver swerved hard to avoid impact. The swerve caused the van to flip onto its side.

“The van driver was lucky. He escaped without a scratch,” Lt Viratch said.

“I am here only as a mediator until the insurance companies’ representatives arrive,” Lt Viratch said.

“No one was injured in the accident and no further investigation regarding the accident needs to be done,” he added.