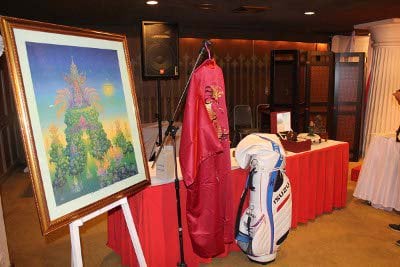 PHUKET: The Rotary Club of Phuket will mark its 35th anniversary by holding a Rotary Fair at Saphan Hin on November 3 to 9.

“The objective of the fair is to promote the community development projects and activities that the Rotary Club members and volunteers contribute to the local community. We will also have fund-raising activities to help support our community projects,” said Club President Saroj Angkanapilas.

There will be booths at the fair selling popular dishes and products from different parts of Thailand, as well as live performances on stage by famous Thai folk and rock singers such as Nui Suweena, Jeab BenJaPorn and Songkrot of the Chama Band.

Among the fund-raising activities will be an auction of items donated by Phuket notables, including a painting by renowned Thai artist Chalermchai Kositpipat donated by Muang District Chief Supachai Pochanukul.

One of his pieces was reported by AsiaWeek as selling for US$17,500 at an auction of Thai art at Christie’s Singapore in 1998.

Other items to go on sale include a collection of Buddha images and amulets donated by the chief justice of Phuket’s Juvenile and Family Court, Pornchai Liaopattanapong; a Vietnamese tea set donated by Phuket MP Anchalee Vanich Tephabutr; a watch donated by Phuket MP Raywat Areerob; and a golf bag donated by Phuket Honorary Consul for Finland Pamuke Achariyachai, who is also the head of the Kata Group of hotels.

“On November 3, at 6:30 pm, will be a fund-raising Chinese dinner at the Saphan Hin Sports Center. Tickets will cost 500 baht per person,” said Mr Saroj.

“The money raised will go toward charity projects such as renovating the buildings and toilets at the Chalerm Prakiat Health Center in Chalong, building a library at Ban Tah Chat Chai School, and buying sports equipment, stationery and water filters for schools,” he added.

Krabi teens claim stabbing of British tourist was a “misunderstanding’