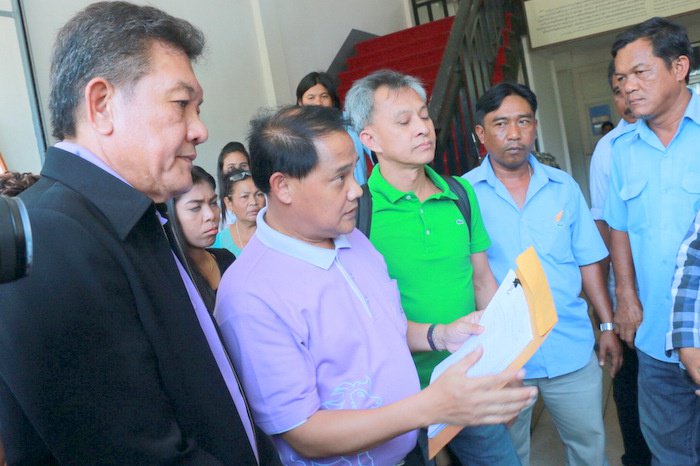 PHUKET: A sortie of about 30 taxi drivers arrived at Provincial Hall today to plea for intervention into an eviction order forcing them to cease operations at Phuket’s main bus terminal in Rassada.

The drivers, led by Yod Sae-Lee, carried banners saying: “We formed a legal taxi co-operative more than 10 years ago. We are forced to leave by Rassada Municipality. What are we, more than 50 drivers, supposed to do? Phuket Governor please help us.”

“Rassada Municipality has taken over the Bus Terminal from the Phuket Land Transport Office [PLTO], effective March 11. Taxis are not permitted by the municipality to operate at the bus station,” read the order.

Mr Sae-Lee explained to Governor Nisit that the drivers who have been working at the bus terminal in Rassada have done so at the request of the PLTO since the terminal opened three years ago.

“We used to operate at the old bus station in Phuket Town, but when the new terminal [in Rassada] opened in 2012, the PLTO asked us to move there,” he said.

“We have worked there since, without any complaints filed against us.”

Mr Sae-Lee also pointed out the short deadline for compliance.

“The deadline is April 10. What can we do?” he asked. “We have our family and parents to feed, and we have to make our monthly payments for our vehicles and houses. Please help us.”

Governor Nisit accepted the complaint and promised the drivers that the issue would be raised at a 9am meeting tomorrow, which will be headed by Vice Governor Somkiet Sangkaosuttirak.

“Rassada Municipality and the PLTO will be called to help sort out what the best solution is,” Gov Nisit said.

Appeased for now, the drivers disbanded.

The Phuket Gazette notes that PLTO chief Terayout Prasertphol was present when the drivers handed the complaint to the governor.