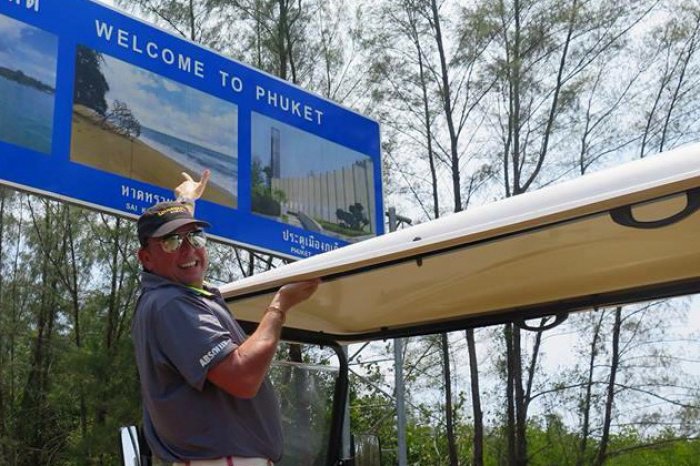 PHUKET: Avid Phuket golfers Mark Cameron and Graham Haslam have completed a world-record golf cart drive from Pattaya to Phuket, and are hoping to raise even more money for charity with an auction at the Hard Rock Cafe in Patong tomorrow night.

“The cart will be up for auction at a starting bid of 200,000 baht, ‘slightly used’,” Mr Cameron joked with the Phuket Gazette this afternoon.

The pair began their record-defeating drive last month, and played at several courses during their 1,400-kilometer journey to Phuket, which ended last Thursday as they crossed the bridge onto the island.

“It was great fun and it was a great experience. I’m glad we did it, but I’m glad it’s over,” Mr Cameron said.

Guinness World Records officially confirming the record drive is expected to be a formality.

“They will confirm the new record once they receive all footage, signed statements and photos and so on,” Mr Cameron explained.

“It will not be official for some time yet, but we can safely say we have set a new record. The previous record was 250km, so even at 251km we knew we had done it.”

Mr Cameron extended his thanks to all sponsors of the drive, especially the ‘seed sponsors’ Gaylin, Drillpech and Opus Offshore from the oil, gas and energy industries.

“They all separately sponsored the cart trip and the Phuket Oilfield Classic golf tourney, which starts on Friday [click here],” Mr Cameron explained.

“So far both events combined have raised about 2mn baht to go to the Phuket Has Been Good To Us Foundation. We will combine the money raised and announce it as a single figure after the Oilfield Classic.”

The charity auction at the Hard Rock Cafe tomorrow will begin at 6:30pm.