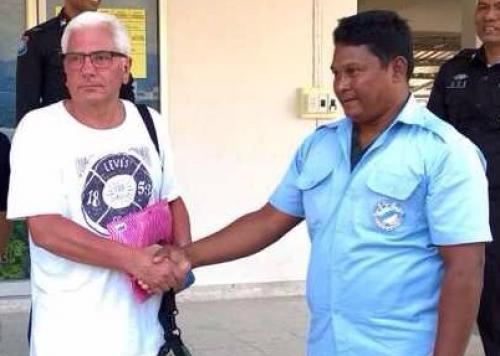 PHUKET: A Phuket taxi driver yesterday returned a bag containing nearly 150,000 baht’s worth of euros and other valuables to a Frenchman who left it in his taxi.

The 57-year-old tourist, Andre Cellier, arrived on January 22 and took a taxi to Patong. When he discovered he had forgotten his bag – which contained his passport and a mobile phone, as well as 3,300 euros – he called the Tourist Police, said Phuket Tourist Police Chief Urumporn Koondejsumrit.

The Tourist Police located the taxi driver, Chatree Saengnon, 35, and found that he had filed a report about the missing belongings.

It took a week to find a mutually suitable time, but finally the two men were united and the valuables returned.

“I would like to thank Mr Chatree for returning my money and other belongings. And I want to thank the police officers for helping me,” a grateful Mr Cellier said.