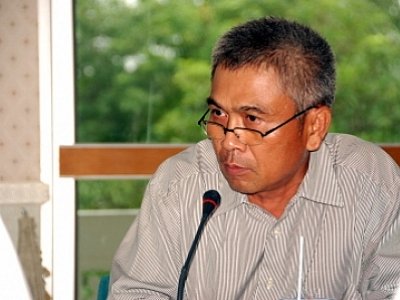 PHUKET: The Phuket Ministry of Natural Resources and Environment (MNRE) is set to argue against its counterpart in Bangkok, which ruled against a plan to build an international convention and exhibition center (ICEC) on the island.

The local MNRE office is one of four “proponents” chosen as part of a Phuket task force to counter the reasons given by the Office of Natural Resources and Environmental Policy and Planning (ONREP) for failing the project’s Initial Environmental Evaluation (IEE).

The task force was selected at a meeting chaired by Phuket Governor Tri Augkaradacha at Provincial Hall on Monday.

The Phuket ministry must counter claims that the site is home to a “natural forest” that should be preserved and that it is a “tsunami risk area”.

“The beach in that area has a steep gradient, so in the case of a tsunami, the waves wouldn’t suddenly hit the shore – they would go through the Pak Phra Channel [between Phuket and the mainland] and into Phang Nga Bay,” said Phuket MNRE Environmental Division Chief Natawan Jumlongkat.

Regarding ONREP’s description of the area as a “natural forest”, Mr Natawan said, “Anyone can see that there is no natural forest there as the board claimed.”

Rounding out the group of Phuket proponents of the project are the Mai Khao Tambon Administration Organization (OrBorTor), the Phuket Treasury Office, and a group representing private sector organizations.

The Mai Khao OrBorTor is responsible for countering the belief that the proposed ICEC site is a traditional nesting site for endangered sea turtles.

“I have lived in Mai Khao for 20 years and I have never seen any sign of turtles laying eggs at Tah Chat Chai,” said Mai Khao OrBorTor Vice President Wirat Makaew.

“I can guarantee that the only area in Mai Khao where turtles lay eggs is in Village 4 [not at the ICEC site],” he added.

Meanwhile, the Phuket Treasury Office is responsible for countering concerns that the project will affect the local residents’ way of life.

The private sector representatives, who hail from organizations including the Phuket Tourism Business Association (PTA), the Phuket Real Estate Association and the Thai Hotels Association Southern Chapter, are to convince the ONREP that the budget of 2.6 billion baht, which has already been approved by Cabinet, is worth spending.

“[If the ICEC were built], it would not negatively affect our investment options because none of us has a big enough budget to invest in a project of this scale,” he explained.

“The ICEC will bring Thailand in line to compete with other major destinations in ASEAN. Look at Bali, they have two big international convention centers,” Mr Somboon added.

The people involved were given 15 days to gather research to support their arguments and present it to the Phuket Provincial Office.

Governor Tri said that the Phuket Provincial Office will invite the ONREP review board to inspect the site first-hand at the end of this month.

“We will work on this as quickly as possible. If the review board inspects the site, they will have the right perception of the site environment and understand the local need [for the project],” he said.