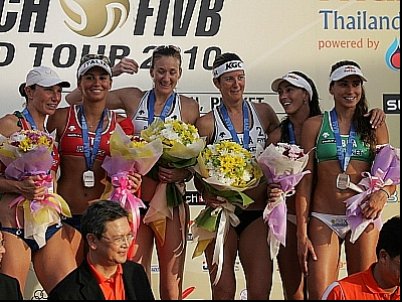 PHUKET: The Phuket Thailand Open powered by PTT will complete the 2011 FIVB Beach Volleyball Swatch World Tour, and once again the event has proved its increasing popularity by attracting the highest number of entries for a women’s tournament out of 29 stages on the World Tour calendar.

This year’s tournament has attracted 82 entries from 32 countries, including 28 of the top 30 ranked teams in the world.

Volleyball powerhouses Brazil, China, Germany, Italy, the Netherlands and the USA will send their strongest pairings to the Swatch World Tour season finale on Karon Beach, from November 1–6.

World Champions and the world’s number one ranked team, Juliana Felisberta Silva and Larissa Franca from Brazil will compete in Phuket for the first time and will be aiming for a record 7th win this season, and a first win for Brazil in the Phuket tournament.

Teams from the USA have dominated the Phuket event, having won this tournament four years in a row with two-time winners April Ross and Jen Kessy (World No.5 team) from the USA returning in search of a coveted third title.

Last year’s beaten finalists Greta Cicolari and Marta Menegatti (World No.7 team) from Italy, 2006 winners Xue Chen and Zhang Xi (World No. 3 team) from China and Sanne Keizer and Marleen Van Iersel (World No.6 team) from the Netherlands, will all hope to prevent the USA leaving with a fifth title.

Germany has entered the largest number of teams with nine descending on Karon Beach, Brazil and Spain travel with five teams each while Australia, Canada, Czech Republic, the Netherlands and the USA will each bring four teams.

Thailand has entered three teams for the tournament, two of which will gain automatic entry to the main draw of the Phuket Thailand Open, as the host country.

Supporting the main event are a number of activities including the PTT Schools Cup and PTT Beach Volleyball camps on the finals weekend and a large sponsor activity zone featuring sponsor booths, a beer garden and games and competitions for beach volley fans.

Admission to the tournament is free.