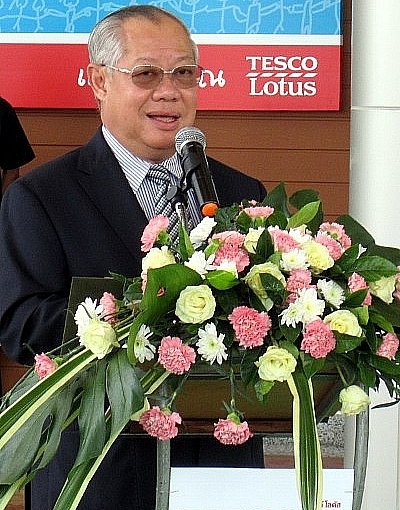 PHUKET: Tesco Lotus executives have dismissed rumors that the opening of its new hypermarket in Thalang will be followed by the closure of its flagship property near Phuket Town.

“The one in Phuket Town will stay open as long as people continue to shop there,” said corporate affairs executive Martin Clutterbuck.

The presence of Energy Chief Mr Jirasak was notable following Tesco’s reluctance to join many other island retailers in charging consumers a nominal fee for plastic bags as a way of encouraging re-use and recycling, a project promoted by the Energy Office.

However, the company has instead encouraged shoppers to enroll in its Green Bag, Green Points project, which rewards customers with Green Clubcard Points for each plastic bag saved. Nationwide, the project saved the use of 4.4 million plastic bags between January 2010 and August 2011, according to management.

They also presented Mr Jirasak with a check for 890,000 baht for the second year of his agency’s Energy Seed project to raise environmental awareness among local youths, as well as 1.2 million baht in support of the Phuket Provincial Office’s project to promote the use of cloth bags over plastic ones.

After the ceremony, scores of shoppers surged through the entrance into the new mall to check out what it has to offer.