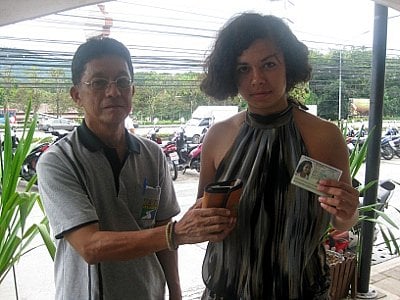 PHUKET: A Phuket taxi driver saved a German tourist from holiday hell yesterday when he arranged for the purse she left in his vehicle to be returned.

When she was finished at 11am, Central Festival taxi stand manager Pom Sukkasem arranged for driver Sompote Tongwattana, 50, to take her back to the Ibis Erawan resort in Patong.

On his drive back to Central Festival, Mr Sompote noticed the German’s wallet on the back seat. As soon as he got back, the honest driver reported it to Mr Pom, who called the resort and notified the German that her purse was safe and sound.

She could pick it up at any time or even have it delivered, Mr Pom told her.

The call gave the German a huge sigh of relief, as the purse contained 14,000 baht in cash, foreign banknotes and other important personal documents.

Eager to be reunited with her purse and in a hurry to get to Phi Phi Island, Ms Hebecca headed straight back and picked up the purse at 1:30pm. She was so relieved that she broke down in tears.

She thanked Mr Sompote profusely, promising to return to Phuket in the future and extol the virtues of Mr Pom’s taxi rank to her friends back home.

Records of each trip are recorded in order that problems like missing valuables can be dealt with as quickly as possible, he added.

Phuket Poll: Are Phuket hospitals up to scratch?