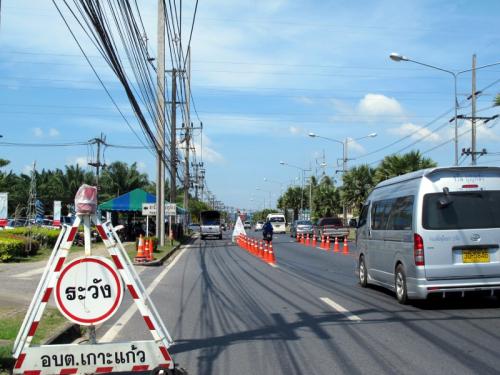 Nine deaths and 24 injuries in a total of 27 accidents were recorded by the Department of Disaster Prevention and Mitigation Phuket branch (DDPM-Phuket). Last year, six people died and 80 were reported injured in 75 accidents.

Though Phuket failed to meet its goal of zero road deaths during the campaign, it did achieve its other goal of decreasing the number of road accidents by at least five per cent.

Dawn broke on the first day of the annual road-safety campaign with no deaths, but later that day road accidents claimed two people’s lives in Phuket.

Yuthapong Taempetch, 37, died after the motorbike he was riding and a pickup truck collided on Kwang Road (see map) in Wichit at 4pm on December 27.

Less than an hour later, Supansa Khamlungtawee, 25, died after the motorbike she was riding and a six-wheeled truck collided in front of a pineapple plantation on Thepkrasattri Road.

On the second day, the death toll increased by one after a family of three riding a motorbike southbound on Thepkrasattri Road near the Thalang Tesco Lotus was hit from behind. The father, who was driving intoxicated, lost control after being struck by the car and then crashed. The driver of the unidentified car fled the scene.

The mother, Tongdech Kamhom, 40, died in the accident. Her 10-year-old son suffered a broken collarbone, a Kulsoldham rescue worker explained to the Phuket Gazette, but her husband seemed not to have suffered any serious injuries. No helmets were found at the scene.

The third day of danger, December 29, claimed the lives of an unidentified woman and a foreign man. The pair were riding a motorcycle along the Cherng Talay-Baan Don Road when they collided with a pickup truck in front of Soi Pasak 3 at about 9:15pm.

There was a reprieve from the consistent road deaths on December 30 as none were reported by the DDPM-Phuket.

Then on New Year’s Eve, two men on a motorcycle on Thepkrasattri Road in Thalang were crushed under a Phuket tour bus in the early morning, bringing the total number of deaths to seven. The victims were Adul Sutthisarn, 44, and Pairote Hemmin, 39.

The eighth death occurred on January 1, when Eak Eakwewchakul, 26, overshot a curve and hit a power pole near the Phuket Go-Kart track in Kathu on his way to Phuket Town.

Manid Sriklang, a 50-year-old man from Khon Kaen, was the final death during this year’s road-safety campaign. Mr Sriklang lost control of his motorbike while leaving Patong on Phra Baramee Road, fell, and hit his head on a sidewalk.

The top causes of accidents and casualties were drunk driving, speeding and not wearing helmets, Phuket Governor Maitri Inthusut said once the campaign came to a close.

Gov Maitri vowed to improve public awareness about the need to wear helmets.

Eight of those who died during the campaign were on motorbikes at the time of the accident; only one was in a car.

Four deaths were attributed to losing control of the vehicle; three accidents involved a collision with a truck.

Almost half of the deaths – four – occurred on Thepkrasattri Road in Thalang.

Riding a motorbike without wearing a helmet – 806

Driver and/or passengers failing to use seat belts – 387

Using a cell phone while driving – 84

Driving under the influence of alcohol – 22

Overtaking in a restricted zone – 21

Failing to stop at a red traffic light – 8