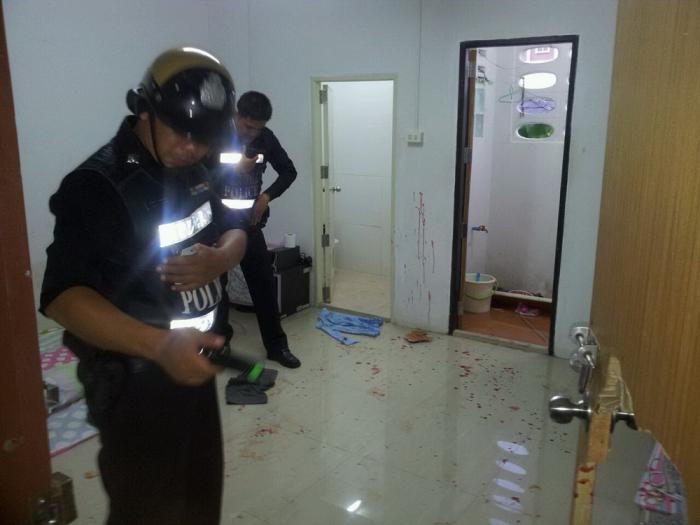 PHUKET: Police are on the lookout for a 22-year-old Phuket student wanted for the fatal stabbing of his ex-girlfriend’s new partner in a frenzied knife attack in Rassada early Thursday morning.

Officers were called to an apartment block in Soi Yongkeng Muna-Utit, off Thepkrasattri Road, near Phuket Rajabhat University, at 6:30am.

“There was a trail of blood leading from the 7-Eleven at the front of the apartment building to a room on the second floor,” Sub Lt Surasak Pipitkul of the Phuket City Police said.

Sunantha Muengyao, 22, told police that she was with her new boyfriend, Phuket native Muhammad Ritratree, 20, when she heard someone kicking the door to the room.

“Before she could answer the door, it burst open – kicked in by her ex-boyfriend Thakrit Jaiphet, 22,” said Sub Lt Surasak.

“Mr Thakrit killed Muhammad out of jealousy. They are all students at Phuket Rajabhat University. He entered the room and attacked Mr Muhammad with a knife.

“Mr Muhammad ran from the room, with Mr Thakrit in pursuit. Mr Muhammad collapsed in front of the 7-Eleven. Mr Thakrit fled the scene.”

He was rushed to Vachira Phuket Hospital, but died from his injuries yesterday afternoon.

“We will check CCTV cameras in the area and question Mr Thakrit’s friends and family. We will request a warrant for his arrest,”Sub Lt Surasak said.