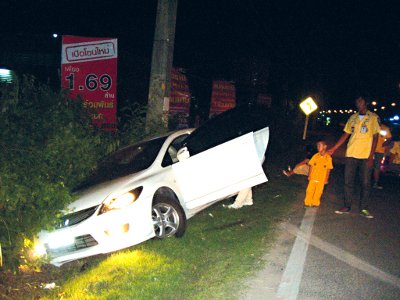 PHUKET: Two Koreans were fortunate to escape serious injury when their car crashed into a power pole in Phuket early yesterday morning.

Kusoldharm Foundation rescue workers were called to the scene just after midnight.

Arriving at the crash site on Thepkrasattri Road southbound in Srisoonthorn subdistrict, they found the two Koreans – identified only as the driver Mrs Songjer and Mr Injanechang as her passenger – still inside their Honda Civic.

The pair were shaking with fear but not seriously injured.

Both were wearing seat belts at the time.

The pair spoke some Thai, but declined to say how long they had been in Phuket or what the purpose of their stay was.

Mrs Songjer reportedly lost control of the vehicle after she veered sharply to avoid hitting a dog.

Thalang Police were not called to the scene because the injuries were minor and there was no damage to state property, rescue workers said.