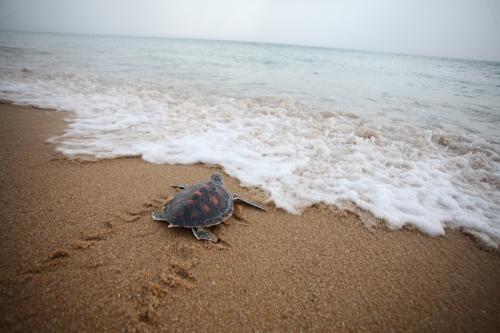 The important annual event is organized to raise funds for and awareness of the plight of Phuket’s critically endangered sea turtles.

Supported by the Phuket Marine Biological Center and the Royal Thai Navy, the event sees the release of rehabilitated green turtles back into the Andaman Sea.

Local officials, Phuket residents and resort staff enjoy an afternoon of fun activities and light refreshments and witness the rewarding sight of the turtles entering their natural habitat.

The work done by the Mai Khao Marine Turtle Foundation (founded by JW Marriott Phuket Resort & Spa), the Injured Turtle Rehabilitation Program (under the Phuket Marine Biological Center) and the Turtle Hatchery Program (under the Royal Thai Navy) is possible thanks to ongoing financial support from the Phuket community.

Everybody is invited to help with the protection of the area’s endangered turtle population. Financial donations are much appreciated, as are people’s attendance at the 4th Mai Khao Turtle Release. Every 2,500 baht raised pays for the rehabilitation of one turtle and its release back into the Andaman Sea.

Phuket’s sea turtles face multiple threats and their numbers have severely depleted in recent years. Commercial fishing kills thousands of them every year. Many more die from eating or becoming trapped in plastic debris littering the ocean, not to mention entanglement in fishing nets and being hit by speedboats.

New 20-baht banknote to launch in Phuket on April 1