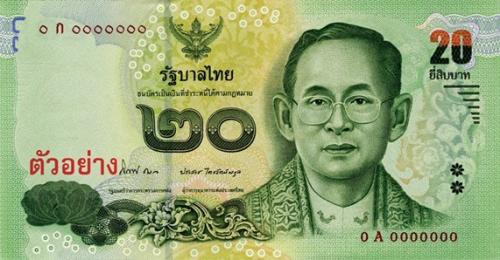 PHUKET: The new 20-baht banknote will be available for exchange at commercial banks in Phuket and nationwide from April 1, staff at the Bank of Thailand told the Phuket Gazette this morning.

“The new design incorporates a range of advanced anti-counterfeit features to facilitate authentication by banknote sorting machines, vending machines and the general public, including visually impaired persons,” she said.

“The portrait of King Rama IX in the Royal House of Chakri gown will be displayed on the front of the banknote. On the back will be the images of the royal statue of King Ramkhamhaeng,” Ms Tongurai explained.

The new banknote is still green, and the same size as the current series.

Among the key security features are a watermark depicting the portrait of HM King Bhumibol Adulyadej alongside the number 20 clearly visible when viewed against the light.

Another security feature is “color-shift” along the thread located on the back of the note.

“It is embedded inside the paper and partially emerges to the surface at regular intervals. Its color changes from green to magenta when viewed from different angles,” Ms Tongurai said.

Also, irregular shapes printed on both sides combine to form the numeral 20 when the note is held up to the light.

To help visually impaired people identify the new note, it features raised letters and numerals and two tactile marks in the shape of flowers which represent the number 2 in Braille.