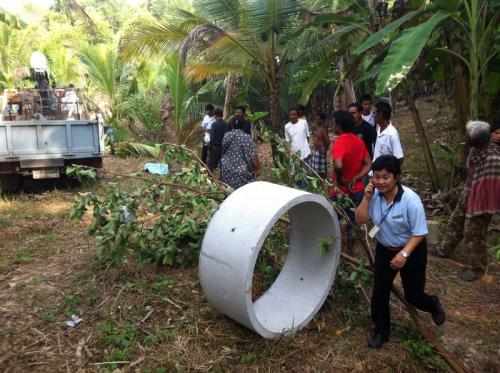 PHUKET: A concrete well ring vendor died in Thalang yesterday afternoon after his crane truck rolled down a slope and one of the outriggers – arms used to stabilize the truck – crushed him against a coconut tree.

Thalang Police were notified that a man had died at a coconut plantation behind Baan Chumpoh Mosque in Pa Khlok at about 4pm.

“One of the villagers wanted to dig a well so he ordered three concrete well rings from Watthikorn Anukulpaiboon, 58,” Lt Chatree said.

“Mr Watthikorn parked his truck and set out the outriggers on each side of the truck to hold the truck in position. He did not notice that he had parked the truck on a slope,” he added.

After he finished unloading the concrete rings, the truck, now lighter without the rings on the back platform, lifted on its suspension and started to roll. Mr Watthikorn was dragged by the outrigger until it reached a coconut tree and stopped, Lt Chatree explained.

“Mr Watthikorn was crushed between the tree and the outrigger and died. The owner of the plantation and his staff saw the incident but they could not stop the truck or help Mr Watthikorn in time,” he said.

The owner called the local rescue workers, who cut down the tree to free the body of Mr Watthikorn.