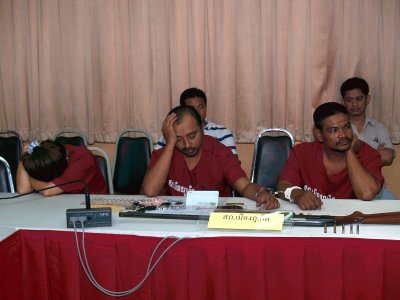 PHUKET: Phuket City Police arrested five people and seized seven vehicles, firearms and a heady variety of narcotics during a drug raid on a home in Koh Kaew on Tuesday.

Acting on a tip-off, police at 5pm found the man sitting in a hut in front of an unnumbered home on Soi Han Farang, off Thepkrasattri Rd northbound in Koh Kaew.

A search of his person found a small packet of heroin in his trouser pockets.

Mr Jakkapan led police to a home on Soi 13 of the nearby Chao Fa Garden Home residential estate, where they seized nearly an ounce of heroin, 30 tablets of ya bah (methamphetamine) pills, seven grams of ya ice (crystal methamphetamine) and two guns.

Arrested and charged with possession and sale of Category 1 narcotics were the home’s two residents: Sommitr “Boat” Nontri, 36, of Pa Khlok Village 7, and his partner Miss Ampa Kumban, 31, listed as the home owner.

“Under questioning, the pair readily admitted they had been selling drugs from the house to local youths,” said Col Komol. “The drugs were discovered hidden in a black eyeglass case.”

Both were charged with illegal use of a Category 1 restricted substance and turned over for processing.

A variety of drug paraphernalia was collected as evidence, including a ya ice pipe and a syringe.

A .38-caliber Smith and Wesson revolver and five bullets were found in the wardrobe, and a Remington shotgun, Model 1100, in a storeroom beside the house.

The couple told police the firearms belonged to friends.

Police also seized as material evidence either in making drug sales or as profit therefrom: five motorcycles, a Honda Accord, a BMW car, a Sony TV, two cell phones, four ATM cards, a bankbook and six items of gold jewelry.

It was not reported whether Miss Ampa’s house at Chao Fa Garden Home estate would also be seized.