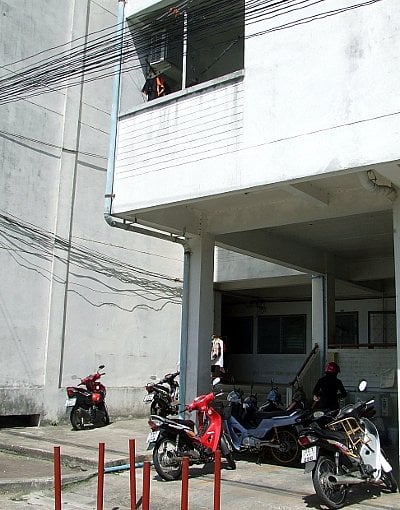 PHUKET: A mechanic is in hospital with severe head injuries after falling from the balcony of his second-storey apartment in Rassada last night.

Police believe the man was walking in his sleep at the time.

Thought to be in his mid-30s, Mr Worrawut fell from his apartment in the Kan Keha public housing project near Rassada Pier.

A security guard at the complex told the Phuket Gazette that Mr Worrawut lived in the flat with his employer and a co-worker.

“They moved in less than a week ago. I didn’t know them very well, but I know they were elevator technicians,” the guard said.

“Mr Worrawut’s employer said that they had a few drinks before sleeping and he was probably sleepwalking, as he is known to do,” said Lt Col Sien.

Mr Worrawut was discovered face down in a pool of blood by fellow residents of the densely-settled area.

It took about 30 minutes from the time of the discovery for him to be sent to hospital, the guard said.

Today, Mr Worrawut is in the neurosurgery ward at Vachira Phuket Hospital, where he remains unconscious and is receiving respiratory assistance, a hospital official said.