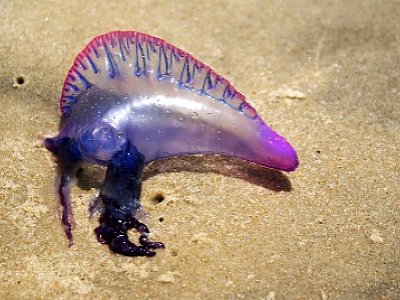 PHUKET: The invasion of Portuguese man o’ war “jellyfish” at Phuket beaches over the weekend appears to have ended, but lifeguards are keeping a watchful eye on the situation in order to ensure the safety of swimmers and beachcombers.

Vitanya Chuayuan, publicity officer of the Phuket Lifeguard Club, confirmed this morning that there have been no reports of the pseudo-jellies since the weekend.

Nine specimens were sent to the Phuket Marine Biological Center at Cape Panwa for analysis.

Dr Wannakiat said the presence of Portuguese man o’ war at Phuket beaches was fairly common in the early months of the monsoon season, from March to July.

The relatively high number that washed ashore over the weekend was probably due to a combination of unusual monsoon-season currents and an abundant supply of small fish offshore, he said.

The numbers were sufficiently high that the PMBC issued a warning to local administrative bodies through Phuket Provincial Office, he said.

The stinging structures of Portuguese man o’ war were still dangerous after they washed ashore, he warned.

Anyone who suffers a sting is to first treat it with seawater and never to rub the wound, he added.

Fortunately the latest flotilla of pseudo-jellies washed ashore without a single sting reported.