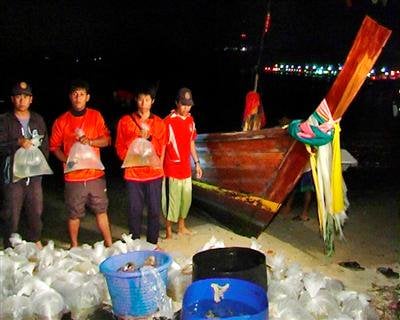 The arrests were carried out by Phuket Marine Police and officials from the Phuket Marine and Coastal Resources Conservation Center (PMCRCC).

Under the direction of PMCRCC Director Paitoon Panchaipum, the officers intercepted two large longtail boats filled with protected marine species as they were coming ashore at Rawai’s Phromthep Cape.

Among the fishing ‘equipment’ collected as evidence in the case were bottles of cyanide.

One of the most toxic substances known to man, cyanide is used to temporarily stun fish so that they can be easily removed from the coral reefs they inhabit.

Cyanide fishing has been described by environmentalists as ‘an act of genocide’ against coral reef habitats due to the damage it inflicts.

A search of the vessels recovered more than 250 fish of various species in 200 plastic bags, all ready for transport. These included protected angelfish and butterflyfish species as well as a variety of shellfish, corals, sea fans and sea anemones.

Officials estimated the local value of the entire haul at about 200,000 baht locally, but with a value of up to one million baht on the global black market for aquarium fish.

It was impossible to financially assess the damage to the natural environment resulting from the cyanide, Mr Paitoon said.

Officials were alerted to the activity by unnamed ‘green volunteers’ who noticed the sea gypsies’ illegal activities, which officials presume to have been carried out near or inside Similan Marine National Park.

The sea gypsies would collect the fish from reefs for transport back to Phuket aboard two longtail boats, officials said.

Collected as evidence in the case were order lists and receipts, indicating that the suspects were working to fill orders placed by smugglers thought to be based in Bangkok, officials said.

After their arrests, the suspects were sent to Chalong Police Station for processing.

Under provisions of the Wildlife Conservation and Protection Act of 1992, the suspects face charges of possession of endangered marine life captured without permission from a restricted area.

They have already confessed to the charges and have been released on bail.

If convicted, they face prison terms of up to four years and/or a fine of up to 40,000 baht.

The center often receives reports of illegal fishing but finds it difficult to arrest the perpetrators because they employ several strategies, such as the use of decoy vessels, to deceive officials, he said.

The arrests were the latest blow to the Rawai sea gypsy community, which is embroiled in a land dispute with a local property owner who wants to evict them from part of the coastal land they claim to have inhabited for generations.

Lots of tourists in Phuket, but they aren’t spending much