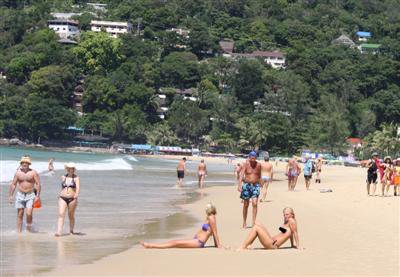 Bhuritt Maswongsa, vice-president of the Phuket Tourist Association (PTA), said that ‘per head’ expenditure seems to be much lower than in the 2007-2008 high season, the last time Phuket enjoyed a normal high season – the 2008-2009 high season was largely negated by crippling airport closures.

Australia and Europe continue to be key source countries during the high season, with the Russian market also performing well, he said.

The industry has also benefited from new direct charter flights from the Chinese cities of Guangzhou and Shanghai, while there are also 24 direct flights to Phuket from Hong Kong every week, he said.

Mr Bhuritt said the overall composition of inbound tourist figures has shifted, with regional tourists now making up about 50 percent of arrivals, many on package tours.

Europe, once the ‘bread-and-butter’ market, has also seen a shift towards more package tourists and independent visitors with limited budgets, he said.

“More tourists who fly in from Europe are now arriving on package tours. Because of the economic situation there, they are spending much less than they used to,” he said.

Hotel occupancy rates are currently about 90 percent overall, based on combined statistics from the PTA and Thai Hotel Association Southern Chapter from over 700 accommodation establishments on the island, he said.

Advance bookings indicate occupancy rates should remain high through to the end of February, but all bets are off after that, Mr Bhuritt said.

“It is difficult to know what will happen from March onwards, but it doesn’t look good.”

People tend to book less far in advance and reservations are coming in very slowly after February, he said.

Individual bar owners in Patong are in general agreement that tourists are watching their purse strings more than in years past.

Vichien Plachumpan, who runs the Crows Nest bar on Soi Sea Dragon said, “There are a lot of customers, but they aren’t spending nearly as much.”

Income at his bar is down about 40 percent year-on-year, he said.

Somphet Moosophon, who runs a pub on Soi Crocodile and is a former president of the Phuket Entertainment Business Association, estimated his revenue was down about 30 to 40 percent year-on-year.

He said there are more tourists from Arab speaking countries and the subcontinent visiting Soi Crocodile, which is well known for its scores of go-go dancing ladyboys.

Ajin ‘Joy’ Kingkaew, who runs the One More bar on Soi Easy, said this high season has been “very good”, but it is her first high season running the business.

“It’s much better than the low season, that’s for sure,” she said.

Lindsay Turpin, proprietor of the Piccadilly Bar on Soi Kebsup, said, “Everybody is saying that there are a lot of different people here now. That may be so, but they are not the big-spending guys in the bars. I think there are more Koreans and Japanese about, but the bars aren’t really their scene.”

“If you walk down Soi Bangla it may look like there are a lot of people about, but honestly it is not as many as in years past,” he added.

TAT to focus on tourist spending, not numbers