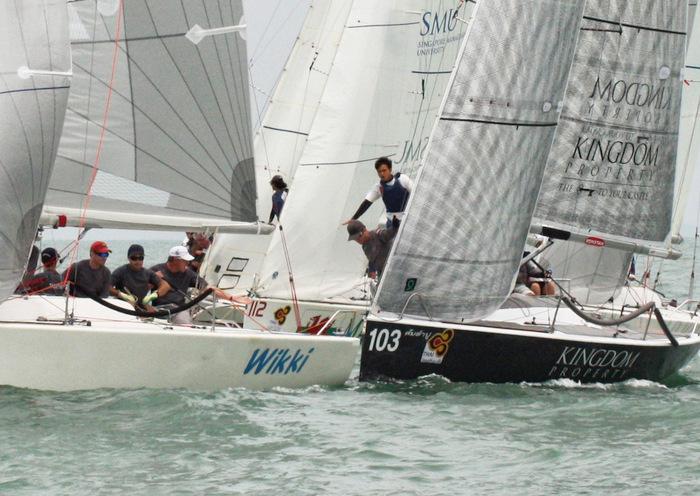 PHUKET: Local yachtsman Scott Duncanson has brought home his fourth prestigious Coronation Cup after securing victory in the Platu national championship finals at the Top of the Gulf Regatta in Jomtien last week.

Duncanson, already a three-time winner in 2002, 2008 and 2010, and representing the Ao Chalong Yacht Club, was joined by fellow Phuket yachtsmen Alfie Rowson and Anthony Gates on board their 7.5m Platu Kingdom Property.

The final day of racing saw Kingdom Property jump to the top of the standings after winning the first race of the day, edging out Chris Way’s Easy Tiger IV by a little over 20 seconds.

The final race win of the series went to David Leslie’s Nataya 131.

“Unusually light and stormy conditions made the racing extremely challenging, with multiple race abandonments due to lack of wind, rain squalls, three general recalls, black flags the 2014 edition had it all,” Duncanson told the Gazette.

After an unlucky eight place in the first race, the crew were under pressure and playing catch-up for the rest of the regatta.

Kingdom Property went into the final day two points behind main rival Easy Tiger IV, a professional crew from Sydney who sailed very consistently to finish no worse than third in every race.

“We won race six which set up a final race showdown, but with the pressure very much on Easy Tiger to sail us down to worse than a seventh-place finish,” Duncanson explained.

“After a very aggressive tactical battle which saw Easy Tiger give up a significant lead to attack and sail us down the fleet, we finally broke through their cover to take fifth place and the overall victory.”

The win still had yet to fully sink in, Duncanson said late last week.

“Winning a one design regatta such as the Coronation Cup stirs up different emotions, especially after all the hard work in creating a program to attract sponsors, preparing a boat, forming a crew, training, tuning and racing, it really takes days for it all to sink in,” he said.

“As you cross the line, it’s all a feeling of relief that you didn’t lose, then there’s the blurred joy with the crew at the presentation ceremony and finally as I write this the realization that we actually did win.

“I’d like to express my sincere thanks our principal sponsor Kingdom Property who enabled me to put together this fantastic team of sailors who made it all happen.”

Now in its 19th year, the Coronation Cup is one of four regattas that make up the annual Platu One Design Championship.

The 7.5-meter long, inshore racing yacht known as the Platu 25 class was specifically designed for Thailand by world-renown yacht designer Bruce Farr in the mid-1990s. The name “Pla-Tu” is in fact the Thai name for a popular small, tasty fish often eaten with the spicy chili paste nam prik.

“As the boats are near identical, boat preparation is key to ensure that the sails and their control systems work perfectly,” Duncanson explained.

“Then it’s up to a talented and experienced crew of five to start and sail the boat around the course as efficiently as possible.”

The Platu 25 class has grown with over 400 boats built to date. It has attained international One Design status and is now raced throughout Europe and Asia-Pacific.

On the final day of racing, Race Officer Denis Thompson had the keelboat and multihull classes into sequence quickly completing two races for most and three for some.

Three races were in order for IRC 1 and despite coming into the last day with a run of firsts, Peter Ahern and his crew on Oi! struggled to a 1-3-3 scoreline. Sailing well, Wan Ma Rang caused the upset in the best breeze of the regatta with a final day scoreline of 3-1-1, enough for them to secure second place overall on countback, behind Oi! who won IRC 1 at their first time of trying.

IRC 2 delivered some close racing over the four days, with Singapore entries Foxy Lady VI (last year’s winner) and Windsikher battling with Japanese entry Karasu, and going into the last day it was Karasu who had the advantage.

As the winds arrived on cue, Foxy Lady VI powered up and scored two firsts on the windward-leeward courses and hence secure the class win by the slimmest of margins, a single point.

Two first places on the final day for Souay 1 in IRC 3 was a great finish to the regatta, but not enough to knock Hi Jinks off the top, which won the class for the second consecutive year.

Cruising went down to the wire with Windstar taking a slim lead in to the final day. The long course and conditions favored Amanda, which sailed to a win – equalling Windstar at the top in the overall standings. On countback, however, Amanda were crowned the winners with three wins in the series compared to Windstar‘s two.

For full results at the Top of the Gulf Regatta, click here.