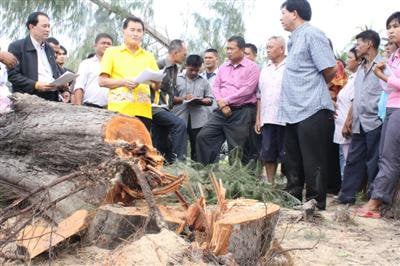 MAI KHAO, PHUKET: Protesters who have blockaded roads to the West Sands resort project began allowing partial access to staff today, but continue to deny access to any large vehicles involved in construction at the site.

The blockade began on Tuesday, when local villagers discovered eight pine trees had been felled with chain saws along the border of the project site and the beach.

The trees were 100 years old, the protesters claim.

Believing the trees were on protected land under the jurisdiction of Sirinart National Park, the protesters began their quest for justice in the fashion that has become the norm in Phuket: setting up a tent and blocking a public road.

Led by Mai Khao Village 2 headman Manoch Saithong, the protesters initially claimed they would continue the blockade until justice is served.

The villagers believe the West Sands management cut down the trees because they would block sea views from hotel rooms and cause pine needles to fall into the swimming pool now under construction.

One highlight of the large project is a waterpark that is scheduled to open on December 20, though it appears that date could now be in question.

Among them is cancellation of the MoU signed between West Sands and Sirinart on January 20, 2009.

One of the provisions of the MoU, ostensibly signed to protect the beachfront, is that public hearings must be held before any development can take place on a 500-meter-long strip of land adjacent to the project site.

The protesters want Sirinart National Park official to take an active role in investigating and bringing the guilty to justice, and want a precise delineation of the boundary dividing the resort land from the national park land.

Signs were recently erected indicating the boundary exists, but do not specify exactly where it lies.

After being shown the felled trees, he said the matter would be investigated and those responsible prosecuted under the law.

He said he has already ordered formation of a committee to investigate the matter.

Chaired by one of the governor’s deputies, the panel will also include appointees from the Thalang District Office, Tah Chat Chai Police, the Phuket Land Office, the Mai Khao Tambon Administration Organization and Sirinart National Park.

If results of the investigation reveal that any hotel structures encroach on public land, they will have to be removed immediately, he said.

Gov Wichai said he discussed the matter with the head of Sirnart National Park and asked how an agreement intended to preserve the forest could result in the felling of such old, shade-giving trees.

“New trees could be planted, but it would take a long time for them to grow back. Most importantly, these trees afforded some protection in the event of a future tsunami,” he said.

Given the felling of the trees. the park administration is now considering scrapping the MoU agreement, he said.

Tha Chat Chai Police Duty Officer Rassada Kleongwong said the case is under investigation. A backhoe and other construction equipment allegedly belonging to those responsible has been seized as evidence. Other evidence includes photographs taken by eye witnesses, he said.

Meanwhile, the partial blockade continues, with protesters reporting to the site in shifts around the clock.

Turtles released in Phuket for HM The King