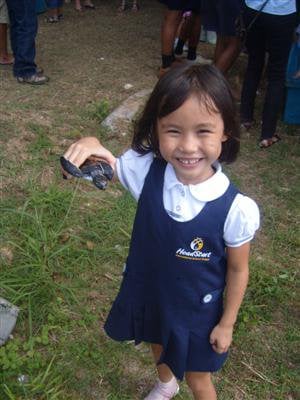 WICHIT, PHUKET: About 100 students, sailors and marine biologists gathered this morning to take part in a turtle release ceremony to mark the 82nd birthday of HM The King tomorrow.

The release, chaired by Vice Admiral Chumnum Ajwong, took place at Cape Panwa, on the beach between the Phuket Marine Biological Center (PMBC) and the Royal Thai Navy Third Naval Area Command Base.

Also present were excited students from the Cape Panwa School and the HeadStart International School in Kathu.

Two adult green turtles and precisely 583 baby green sea turtles that were hatched and raised at the PMBC were released.

The 583 number was chosen because it is considered auspicious: ‘5’ being the date of HM The King’s birthday and ’83’ the age he will turn on his birthday in 2010.

Microchips were implanted in two of the turtles to allow researchers to track their movements.

In Thailand, animal releases are a traditional way of making-merit used on many different occasions.

Turtles are often chosen as they symbolize longevity.

Green turtles are known to live up to eighty years in the wild under the right conditions.

Like all native sea turtle species they are on the verge of absolute extinction in local waters from factors that include illegal fishing practices, pollution and poorly-regulated coastal development.

In another King’s Birthday celebration, Phuket Governor Wichai Phraisa-ngop led a candle lighting ceremony and singing of the Sadudee Maharacha (celebration of Great King) at the Phromthep Cape public park in Rawai on Wednesday evening.

Rawai Mayor Aroon Solos and about 1,000 others took part in the ceremony.