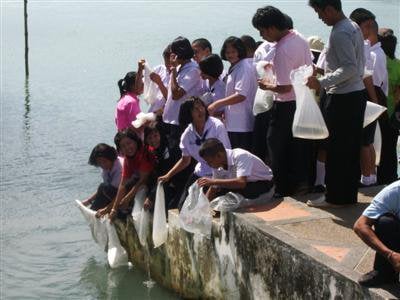 The participants, mostly school children, gathered at Mudong Pier in Wichit for the event, which began at 10am.

Released into the sea from plastic bags filled with seawater were 2.5 million tiny postlarval prawns and crabs.

The event was organized by Wichit Municipality and the Fisheries Department’s Phuket Marine Biological Center (PMBC).

The tiny creatures, released into a mangrove area, included 2,000,000 banana prawns as well as 50,000 blue swimming crabs from the Thungtalay Forest Crab Research and Conservation Study Center, a Royal Patronage Project in Krabi.

In addition to celebrating HM The King’s birthday, it is hoped the activity will improve mangrove ecosystems in and around Chalong Bay and encourage local fisherman to follow the tenets of HM The King’s Efficiency Economy Theory.

Gov Wichai Praisa-ngob presided over the opening ceremony and joined in the release.

Another man shot dead in Chalong