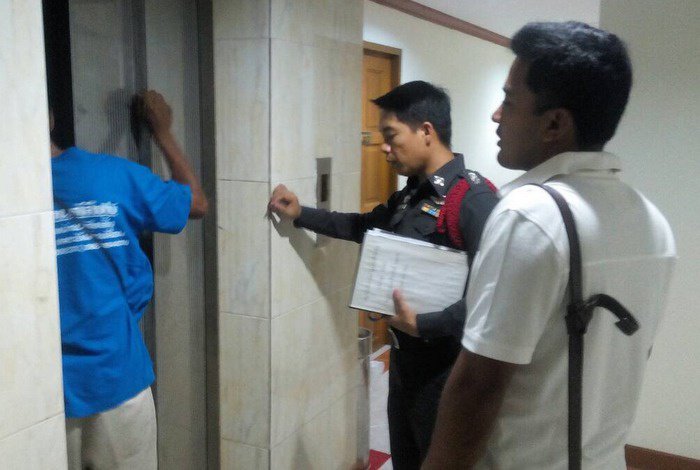 PHUKET: Rescuers helplessly watched a Swiss national stuck in an elevator shaft in a Patong hotel die early this morning.

“We think that the doors to the elevator opened up before the lift had arrived and that he stepped into the shaft, unaware that there wasn’t actually an elevator there,” said Maj Teerasak Boonsang of the Patong Police. “An employee heard the sound of him crashing onto the roof of the elevator.”

When Baan Paradise Hotel employees arrived at the scene, they found the 54-year-old man, who police declined to name, upside down with his head wedged in between the elevator and the wall of the elevator shaft.

“I was on the fourth floor when I heard the sound. I ran to the elevator and saw that the man had fallen. I went to the third floor to try and open the doors, but I couldn’t get them open,” a hotel employee said.

“He was still alive, but was in a weak condition when police and rescue workers arrived. He was calling out for help,” Maj Teerasak said. “We tried to get him out, but the hole was too narrow – he was trapped for almost an hour.”

Eventually, the hotel mechanic was able to lower the lift to the first floor, where there was more space for rescuers to free the man’s body, explained police.

Police are continuing their investigation to establish why the elevator doors opened before the lift had arrived to the fourth floor.

The Swiss Embassy has been informed of the death. Police are withholding the man’s name pending the notification of next of kin.