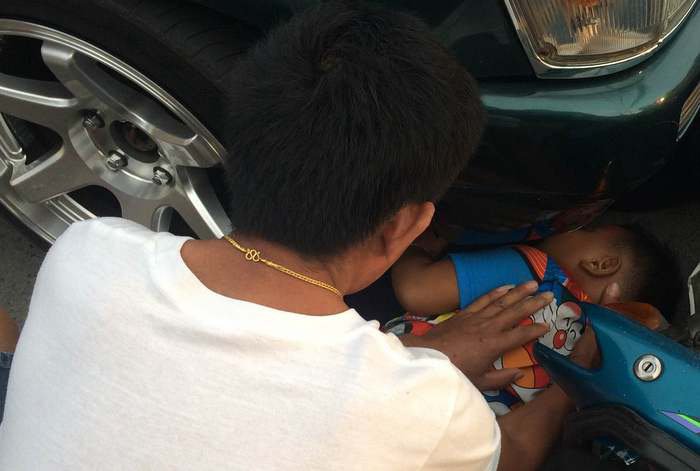 PHUKET: A Koh Yao man was killed and his 4-year-old son injured after they ran a red light in Phuket Town yesterday.

Rakchart Koondee, 36, and his son Chinnapat Koondee, who was riding passenger in front of him, were turning right onto Korjan Bridge in Phuket Town when they failed to stop at the traffic light, explained Maj Sakon Krainara of the Phuket City Police.

A motorbike with right of way, which was also heading toward the bridge, collided with Mr Rakchart.

“When we arrived at the scene, Mr Rakchart and his son were wedged beneath the front of a truck that had been stopped at the light. We found helmets at the scene, but they were broken from the impact,” said Maj Sakon. “Nong Chinnapat was alive and crying for help.”

Rescue workers performed cardiopulmonary resuscitation (CPR) on Mr Rakchart. However, he was pronounced dead by doctors on arrival at Vachira Phuket Hospital.

Nong Chinnapat, who had not been wearing a helmet, received treatment for minor injuries.

Police have yet to press any charges.