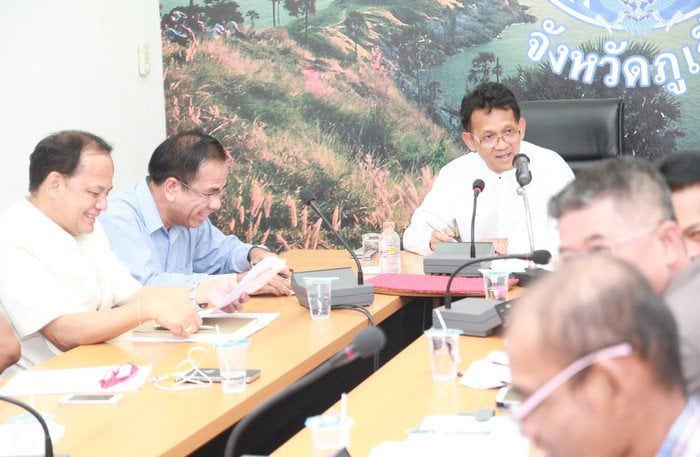 PHUKET: Qualified cyclists will soon be chosen to participate in the first-ever ‘Bike for Dad’ event in honor of HM King Bhumibol Adulyadej’s 88th birthday.

A total of 100 Phuket cyclists will have the chance to ride to Bangkok, along with cyclists representing other provinces in the Kingdom to pay tribute to HM The King.

It is not yet known what qualifications riders will need in order to participate, as the governor is waiting for more information from Bangkok.

“The Bike for Dad event will be organized to express loyalty and gratitude to His Majesty the King and to establish unity throughout the nation” Phuket Governor Chamroen Tipayapongtada said.

“There will be two events. In one event, 100 qualified cyclists and 20 substitute cyclists will be chosen to ride from each province to Sanam Luang, an open field and public square in front of Wat Phra Kaew and the Grand Palace,” Governor Chamroen explained.

Registration dates for the event have yet to be set, though Gov Chamroen said that they plan to announce the chosen cyclists on November 2.

A second event will be held in Phuket where cyclists will travel 29 kilometers from Provincial Hall to Wat Chalong and back through town to Saphan Hin, before finishing the loop back at Provincial Hall.

Registration will be from November 2 through November 30.

National News Bureau of Thailand (NNT) reported that His Royal Highness Crown Prince Maha Vajiralongkorn will also be leading a bicycle procession at the Royal plaza on December 11.

The event will be broadcast live on television.

Thousands of cyclists turned the streets of Phuket blue at the Bike For Mom event. Video: PGTV

In August, people on Phuket, and throughout Thailand, smashed the Guinness World Record for most cyclists riding at the same time with the ‘Bike for Mom’ event honoring HM Queen Sirikit’s 83rd birthday.

The event set the record with 146,000 ‘eligible’ cyclists, which more than doubled the previous record set by Taiwan.

The recorded-breaking event was held by order of the Crown Prince, who wished to express his gratitude and loyalty to Queen Sirikit on the special occasion (story here).